YouTuber’s clothes torn in Lahore, complaint against 400 jumped in the air 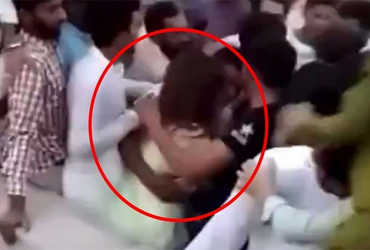 The incident happened when the girl along with her sisters had gone to shoot a video of Independence Day: Video Viral

Lahore: A YouTuber molested a woman on the occasion of Independence Day in Lahore, Pakistan. The Lahore Police has filed a complaint against 400 people. The video of the woman being molested and tortured went viral on social media, following which the Lahore Police woke up and action was taken.

Several YouTubers gathered at Azadi Chowk in Lahore, Pakistan on August 14. During which the woman became a victim of an incident of molestation on YouTube. Some other YouTubers present there made a video of it and uploaded it on social media. At the same time, action was demanded before Prime Minister Imran Khan and Punjab Chief Minister Usman Buzdar.

In this video going viral, many young women are shown jumping in the air. At the same time, the clothes of the girl were also torn and teased. His salwar was also removed. After the video of the incident went viral, the police reached the girl and then lodged an FIR.

“I had gone to Azad Chowk with six friends to shoot a video of Independence Day,” she told the police. During this other YouTube members started teasing me. In which later other young men and women also joined. Meanwhile, my mobile phone, gold ring and Rs 1.5 lakh were snatched from me.