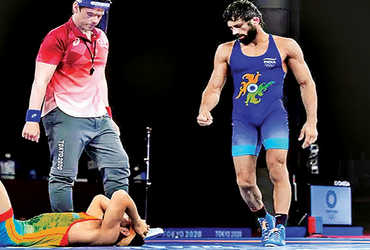 – India’s women’s hockey team lost 2-1 to Argentina in the semi-finals, now a chance for bronze

Tokyo: Wrestler Ravi Dahiya competed in the 5 kg weight category for India at the Olympics today. In the class, he defeated Nurislam Sanayev of Kazakhstan in the semi-finals to reach the final. That is, his silver medal is fixed. However, today he defeated Sanayev by ‘Victory by Fall’. Sanev was on his way to a decisive 2-2 win when he suffered a hamstring strain. However, he continued the fight but Ravi Dahiya knocked him down with a double leg attack.

Ravi Dahiya’s silver is fixed, hence he has become the second wrestler after Sushil Kumar (2012 Olympics) to win a silver medal. However, Indian fans are confident that they will face world champion Ziur Uguyev of Russia in the final tomorrow at 4 pm.

In wrestling, only 5 kg. Deepak Punia will compete for the bronze medal in the category. Anshu Malik also has a chance in women’s wrestling. All the three results will be available tomorrow from 3.30 pm to 6.30 pm.

India’s Lovlina won the bronze medal in the women’s welterweight boxing semifinal after losing to Surmeneli of Turkey.

Argentina defeated India 3-1 in the women’s hockey semi-final and now the Indian women’s team will play the same way as the men’s to win the bronze medal.

For India, Neeraj Chopra is still hoping for a medal in javelin throw as well as Bajrang Punia and Vinesh Phogat in wrestling.