With the return of the Taliban, an Afghan activist fears for his life 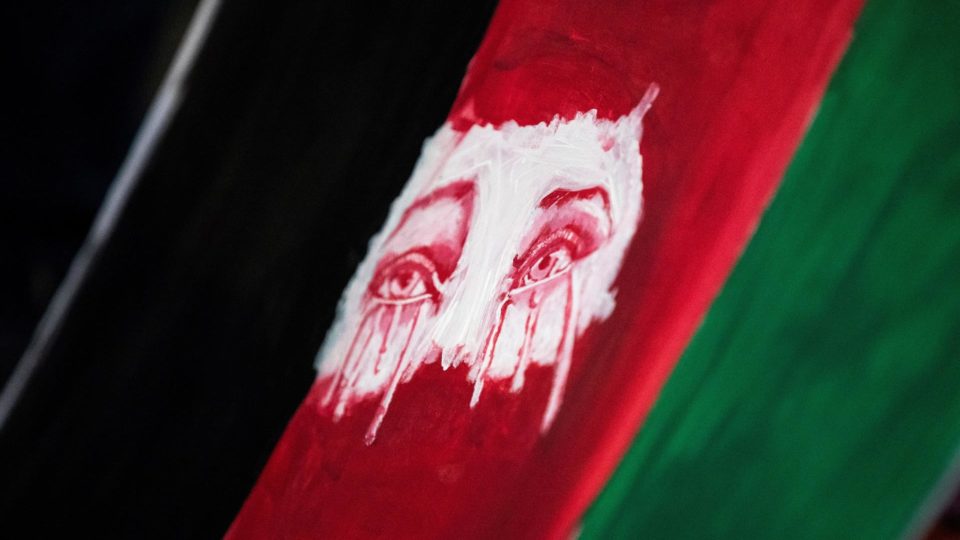 A poster showing the eyes of a woman weeping in an Afghan flag is displayed during a pro-Afghanistan vigil in front of the West Los Angeles Federal Building in Los Angeles, California, United States on August 17, 2021 | Photo: ETIENNE LAURENT / EFE

Nilofar Ayoubi is one of thousands of Afghan women whose lives have radically changed in a few days: she is in Kabul with her husband and her three children (three and five years old and one to 11 months old) and has been threatened by the Taliban. , who came to pick it up at your workplace and at your family home at least three times in the same day. Now she is trying to leave the country as soon as possible.

“In the picture you can see two men, but four more are inside the car. I don’t know what to do. I have no words to express my feeling of anger, fear, frustration and disappointment at the same time, “Ayoubi wrote on Twitter, after seeing through a security camera that several men were looking for her.

Ayoubi is an activist, defender of women’s rights and has worked as an English teacher. She currently owns the international health and beauty brand “Forever Living”.

However, with the Taliban entering Kabul on August 15, she became a target and now fears for her life and that of her family.

“A Taliban was with my family today. I am very scared and I do not know what to do. Things are very tense, I can’t say anything. at the airport and get out of here, “she said in an anguished voice, in an interview with Agência Efe.

Ayoubi says she received a call from a former Afghan government official that left her confused.

“I got a warning that the Taliban have a long list of people like me, like her, going house to house and killing people, and that won’t make the headlines. fear. If so. true., means I don’t have much time, “he said.

She thinks the only solution is to leave the country as soon as possible, with her family, but so far it has been an impossible mission.

“As a women’s advocate you can see my situation right now, what can I do? I can’t even save my family’s life, what can I do for others? I’m afraid for my life, for theirs. I’m scared for theirs. safety. I’m devastated. And I don’t know what’s going to happen. I just need to get them out as quickly as possible, “he said. declared.

No commercial flights leave Kabul and, according to the activist, no military flights have responded to her evacuation request.

“Right now, the only thing that matters is the safety of my family, the lives of my children, my mother and my brother. We need them to help us leave the country no matter what. where, “he lamented.

Ayoubi’s story went viral on social media thanks to communications and marketing specialist Laia Marsal, with whom she connected informally via Twitter.

So far, the Spaniard has helped her complete the form to try to get a US visa and has made the situation public so the woman and her family can be on an evacuation list.

Women who participated in Afghan politics before the Taliban returned to power feel cornered. Afghanistan’s youngest mayor, Zarifa Ghafari, said earlier this week that no one could help him.

“I’m sitting here waiting for them to come. There’s no one to help me or my family. I’m just sitting with them and my husband. And they’ll come after people like me and kill me,” said Zarifa Ghafari, 27. , mayor of Maidan Shar at British newspaper i. “I cannot leave my family. And anyway, where would I go?

The fear stems from the treatment of women in 1996 and 2001, when the Taliban ruled most of Afghanistan, including the capital Kabul. Back then, women could rarely leave the house, even for shopping, and when they did, they had to be covered from head to toe in long burqas and accompanied by a male relative. Girls’ schools were closed and stoning and executions were rife for those who flouted the fundamentalist group’s strict interpretation of Islamic law.

Some women, however, have decided to stay in the country, such as education consultant Payvand Seyed Ali. with what we have, and what we have includes promises from the top Taliban that women will have access to education and work. “

Trying to improve their image inside and outside the home, Taliban spokespersons said they would respect the rights of women and minorities “in accordance with Afghan standards and Islamic values.” The statement was seen as vague and, coupled with the Taliban’s lack of credibility, the message did little to assuage concerns.

Malala Yousafzai, shot dead by the Taliban at 15 for campaigning for girls’ education in Pakistan, wrote an op-ed for the New York Times on Thursday, saying she feared for her “Afghan sisters.”

“Activists I spoke to feared a return to a purely religious education, which would leave children without the skills to realize their dreams and their country without doctors, engineers and scientists in the future,” Malala wrote. “They are asking for protection, education, freedom and the future that has been promised to them. We cannot continue to fail them.”