Willing to work with Taliban if needed: British PM 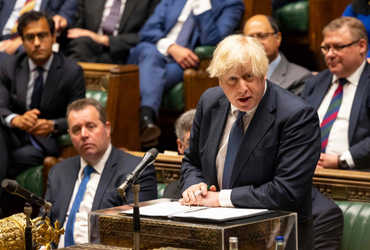 Britain, which claims to not allow the Taliban regime to come to power at gunpoint in Afghanistan, has changed its stance in a week. British Prime Minister Boris Jones has said Britain is continuing its efforts to find a diplomatic solution to Afghanistan and is ready to work with the Taliban if needed.

“The task of evacuating British nationals and allies from Kabul airport is extremely difficult,” Jones told the media after a cabinet meeting on the crisis in Afghanistan. But recently the situation has partially improved. I assure my people that efforts are underway to find a political and diplomatic solution for Afghanistan. However, we are also ready to work with the Taliban if needed. However, this will be the last option. As of Friday, more than 3,000 British civilians and their supporters in Afghanistan had been evacuated from Kabul. He stressed that his government is working day and night to evacuate as many people as possible from Afghanistan.

On the Taliban, Jones said he believed the new Taliban was likely to be more moderate. However, we can only hope for it. However, I have spoken to US President Biden, French President Macron, German Chancellor Merkel, and we all agree on one thing: we will evaluate them by the actions of the new Taliban. And this is very important. Meanwhile, the British government has announced plans to allocate 5 million to local councils to provide housing for Afghans in the UK under the ARAP programme.