Why have the people of this Chinese village lived in the sea for 1500 years? 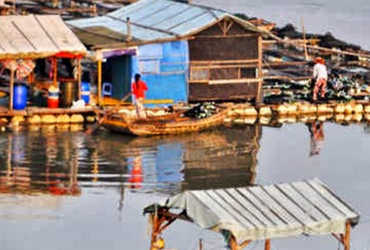 There is a saying in Gujarati that a house can be built in water if you have money, but the entire village of China with a population of 6,000 is situated in the sea. Without land directly or indirectly, the entire village floats in the sea with the help of wooden hollies and rafts. Villagers have also built small and big houses. Surprisingly, children also study in water. There is also a market for buying the necessities of life, a fishing species called tanka is found in China. It is believed that 1500 years ago these ponds chose to remain in water to avoid the wrath of kings on the land. Today the population of this village is 4 thousand. The village is located in the southeast of Fujian Province, near the city of Ningde. This place is also known as Gypsy of the Sea in China.

Surprisingly, the people of this village still rarely come to the land. The people of Tanka caste with their foresight have prepared huge plots of wood so that they do not have to go to the land. The whole life of these people is connected with water. When it is morning people go fishing. Experts note that these people did not even set foot on the ground until communist rule was established in China after the revolution. However, now he has started getting in touch with the people living on the beach with some concessions. Yet no one wants to get rid of the tradition of living in a floating house in water. Even today boys and girls are married in boats.