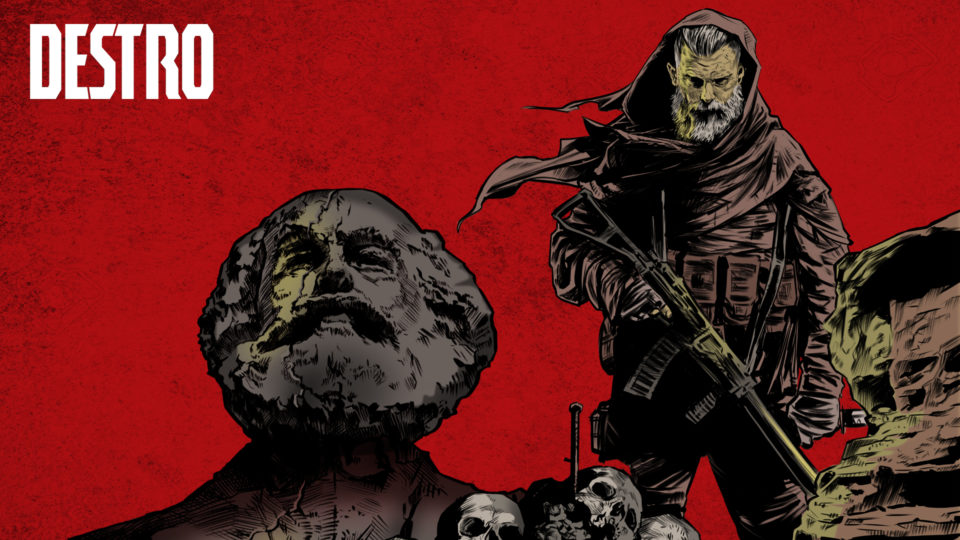 São Paulo, 2045. A communist dictatorship has spread across the planet and the Brazilian metropolis is destroyed. There are no more dogs – they have all been devoured by starving locals, including a large number of Argentines who fled the Peronist government, even more cruel than that of Brazil. Drones are monitoring people, who have been forced to enroll in a global biometric system. In this scenario, a former military man walks in the shadows, unidentified by the digital Marxist dictatorship. His name is João Destro.

This is the starting point of HQ Destro, scripted by Luciano Cunha and designed by Michel Gomes. Cunha rose to fame with the Doctrinador comic book, designed in 2008, released in 2013, which tells the story of a federal policeman who, in his spare time, hunts and kills the corrupt. In 2018, this story was transformed into a feature film and a series for the channel Space, it is the most watched national production in episodes in the history of the channel.

The Indoctrinator appears in the story of his colleague, Destro, who lives in a dystopian future. This second project was carried out thanks to a crowdfunding campaign, completed in December 2019. The objective was to collect ten thousand reais, but 587 people raised R $ 48,606. Cunha remembers that this support was very important, as it happened at a time when it was being “canceled” for embracing her conservative thinking. “I needed to reaffirm my values ​​and my principles and the idea of ​​the character was already in my head. It was to add hunger to the desire to eat ”.

The character Doctrinador Luciano Cunha, creator of Righteous and Doctrinator

“It’s a two-way street: we post their material here (we’ve released two editions of the Alt Hero series already and have 4 more releases in the works) and they post our comics there,” he explains. he. “This is a totally grandiose and unprecedented partnership that, without the fact that we are conservative, would feature in every cultural section and geek portals in Brazil.”

Luciano Cunha is 48 years old, was born in Duque de Caxias (RJ), is a graphic designer, worked in advertising agencies and today makes his living from comics. His main influences on comics are Stan Lee, Jack Kirby and John Buscema. He recently returned to the Indoctrinator with a new adventure called Red Virus. Your best-known hero is now facing a global plot of corruption. “The surreal global geopolitics triggered by the pandemic was a full plate for us to create this story,” he says.

The partnership with Arkhaven encourages the author to design a number of other projects. They are now in gestation within an editor co-created by him a year ago, Super Prumo. “The goal is to produce pop content, but with a conservative approach. Or, as they say, heroes like in the good old days, with plots focused on action and honor, and not on identity activism ”.

This is indeed how the publisher presents itself on its website: “Super Prumo éditeur, a new company which is born with the help of courageous friends – more courageous than ever – will bring the stimulus back to a certain level. way of being. and a vision of the world: heroism, the spirit of sacrifice, generosity, justice, greatness and joy ”.

Luciano Cunha was once on the left, “very left, one of those who wore Che Guevara T-shirts”. But today he is conservative. “Fortunately, I matured and met other authors like Raymond Aron and Roger Scruton. Once illuminated, you don’t want to go back into darkness. “

Since Destro’s arrival he says: “I have been hunted down, slandered and canceled on the Brazilian comedy scene. But, as I never lowered my head and remained firm in my intentions, I ended up creating my own scene within the scene ”. This captive audience keeps the publisher standing, he says. “And this ‘survival’ of the cancellation is very irritating to activists in the sector.”