Who is Salima Mazari? This brave woman is afraid of Taliban terrorists 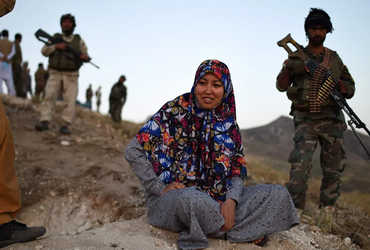 The Taliban’s havoc continues in Afghanistan. Terrorists are doing a horrific massacre here. According to the report, Taliban terrorists have succeeded in capturing an area of ​​​​Afghanistan. Terrible atrocities are being committed on the people there. The residents of the area are being told to hand over their 12-year-old girl to the terrorists. Meanwhile, the governor of Afghanistan’s Charkint district, Salima Mazari, has taken a stand against Taliban militants.

According to a report, 40-year-old female governor Salima Mazari handles the administrative work of Char Kint district as well as bravely combats Taliban militants with the Afghan army. Salima has taken up the gun against the terrorists.

Salima Mazari said that she is sometimes in Charkint district office and sometimes fighting Taliban terrorists with a gun in her hand.

Terrorists will not succeed – Salima

“If we don’t fight, we will lose the battle against extremists and fundamentalists,” he said. We cannot let it succeed.

Salima Mazari was born in Iran in 1980. His family fled from Afghanistan to Iran during the Soviet war. Salima Mazari is a graduate of Tehran University.

In the year 2018, Salima Mazari came to know that the post of governor is vacant in Charkint district of Afghanistan i.e. her home district and application has been sought for her. Salima became a candidate for the governorship and was later elected governor on the basis of her merit.

Salima said that at first she felt that people would not accept her as she was a woman governor but the people of Charkint district responded well and supported me a lot.