When Afghanistan is ruled by Taliban, neighboring countries are in action mode 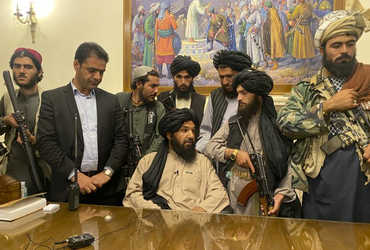 The Taliban’s success in the civil war in Afghanistan has raised concerns in neighboring countries. Afghanistan is bordered by Pakistan to the east, India, China to the northeast, Tajikistan, Kazakhstan, Turkmenistan and Iran to the north. The Taliban flag is hoisted at the Rashtrapati Bhavan in Afghanistan. Big leaders, including President Ashraf Ghani, have left Afghanistan. Afghanistan shares a 90-km border with Taliban stronghold Pakistan. The seven districts, known as Fata, are considered Taliban strongholds. The Taliban have also captured parts of Afghanistan near the border with Pakistan. Pakistan has to be handcuffed, but other neighboring countries have also increased vigil. Taliban are not only rulers but also an ideology which interpret Islam in their own way. The Afghan refugee issue is bound to become a thorn in the neighbourhood, as the militant activities of the Taliban increase.

Tajikistan shares a 15-km border with Afghanistan. The entire area of ​​Afghanistan along the Tajik border has come under Taliban control. Tajik President Emomali Rakhmon ordered the deployment of more than 30,000 troops to the Afghan border in July. More than 200 tanks have also been deployed on an urgent basis. Tajikistan has always been known to maintain good relations as a neighbor even in times of crisis but this time in no mood to take risks. The Taliban cannot be named as one of the bases of Russian troops in Tajikistan. Good relations with Russia may be a strategic advantage, but the question of refugees from across the border is complex. Tajikistan has never recognized the Taliban as a political force and keeps a close watch on the situation.

Turkmenistan does not want to be oblivious to Taliban

Turkmenistan has increased the number of troops on the Afghan border. In addition to rocket launchers and tanks, warplanes have started patrolling the skies. Turkmenistan has long been preparing to take Afghanistan hostage as a precaution against the Taliban. Turkmenistan fears the Taliban’s ideology is as contagious as a virus if its sleeper cells are active in its own country. The Taliban occupation of Afghanistan could be a major source of extremist attacks. Drug and weapons smuggling may also increase. People of Turkish origin live on the border with Afghanistan and the Taliban can make them their hands. Turkmenistan is in constant contact with the Taliban. A Taliban delegation visited Ashgabat after the United States and its allies began a withdrawal of troops. A Taliban delegation was also seen in Turkmenistan last July.

The Foreign Ministry of Uzbekistan has decided not to bow down to the neighboring countries. Wants to stick to its policy of neutrality. Uzbekistan has been a supporter of peace talks between the Taliban and the Afghan government. He was also active in signing peace agreements between the US and the Taliban. Crowds of refugees from Afghanistan may come to them, some of them with weapons, which can spoil the atmosphere in their own country. Some Afghan soldiers have tried to cross the border into Uzbekistan as refugees. This Central Asian country is not ready to take on the new burden as its economic condition is already bad. Uzbeks live in large numbers in the northern part of Afghanistan. If even 10% of these people try to enter Uzbekistan, the balance may be disturbed. However, it is only natural to be concerned that Taliban-minded extremists are more active in Afghanistan than refugees.

Afghanistan’s neighbor is a Shia country while the Taliban are Sunni. Iran has strained relations with Arab countries but is taking a tough stance on the growing Taliban in Afghanistan. Iran is plagued by extremists and refugees coming from Pakistan. Hundreds of Afghan government soldiers could take refuge in Iran to escape the Taliban. Countries that felt the Taliban posed no threat to them have also become wary, including Iran. Iran has strengthened its presence on the border between Afghanistan and Pakistan. Surprisingly, Iran has been in contact with the Taliban for a long time. Last month, a Taliban delegation met Iran’s foreign minister in Tehran. Some Central Asian countries including Iran, Turkmenistan, Uzbekistan are making diplomatic efforts to establish direct contact with the Taliban.

Over the past 20 years, India and Afghanistan have invested in about 500 small and large projects, including schools, hospitals, health centers and bridges. There has also been considerable investment in the Parliament Building, Salma Dam and Jarand Delaram, built as a symbol of the Republic in Afghanistan. India has invested crores of rupees in the development of Iran’s Chabahar port. Nothing can be said about what will happen to these projects as the Taliban gains strength in Afghanistan. India had established good relations with the present Afghan government.

It is certain that with the Taliban coming to power, the balance of relations will deteriorate. Although Taliban spokesman Zaibullah Mujahid has assured good relations with India and India will not get into Pakistan-Pakistan conflict, a few days ago the Taliban accused India of supplying arms to the Afghan army. There are plans to bring back the embassy staff to India via Iran via a special plane after the Taliban entered Kabul last Sunday. The time has come for India to think not only of its embassy but also of its relations with Afghanistan. India has also expressed concern in the United Nations Security Council.

China is following a dual policy of supporting Taliban

China, which advocates international terrorism like Masood Azhar, also fears the Taliban, which has a radical Islamic ideology, but does not accept it. Uighur Muslims live in large numbers in the Xinjiang province of China. Uighurs are being persecuted for linking them to China’s political agenda. China has banned the religious activities and customs of the Uighurs. China seeks to curb domestic fundamentalism while following a two-pronged policy of supporting the Taliban. Two weeks ago a special Taliban delegation went to Beijing. The visit comes after the Taliban captured the Badakhshan region near the border of western Xinjiang province. Chinese Foreign Minister Wang Yi has described the Taliban as an important military and political force in Afghanistan. China holds talks with Taliban on security and peace in Afghanistan. Thus China is supporting the Taliban.