We will kill if US-UK aides don’t surrender: Taliban 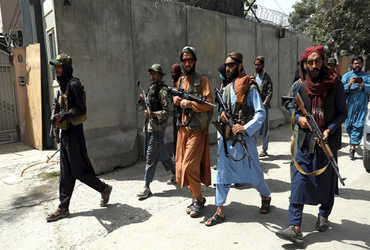 The end of America’s 20-year military war in Afghanistan, the last plane departed from Kabul

With 200 Americans still trapped in Afghanistan and unable to leave the country, Taliban likely to fall victim

As they left for the US, the Taliban opened fire and danced fireworks at Kabul airport

Kabul: America has withdrawn all its troops from Afghanistan. At the same time, those who support America are now being victimized and killed. The Taliban have openly told their own citizens that they will die if they do not surrender.

The Taliban is sending letters to civilians in Afghanistan who were once supporters of the US and British forces. Those asked to surrender may later be arrested and brought to the Taliban’s court.

If not, the Taliban have ordered their terrorists to find them and kill them. As a result, the sword of death hangs over many Afghan civilians. Not only America but also businessmen or businessmen who sided with Britain are on the lookout for Taliban terrorists.

One such letter was received by Naaz, a businessman working in Britain. Road workers in Helmand, UK had applied for British citizenship which was rejected. Similar letters have been given to those who helped in translation or in some other way for the British and American armies.

Afghanistan, on the other hand, has been battling the Taliban and other terrorist organizations for over 20 years. However, the United States began withdrawing troops in May, which ended on August 31. US officials are no longer present in Afghanistan. The last three US planes took their final flight from Kabul airport and reached the US.

The United States took power from the Taliban in 2001 and helped establish a stable and civilian government in Afghanistan.

For a total of 19 years, 10 months and 25 days, US troops have been guarding Afghan soil, which is finally over, and Afghanistan is now in the hands of the Taliban, forcing many Afghans to flee the country. Women and children are the worst victims.

Taliban militants celebrate at Kabul airport after the last US flight. At the same time, now Kabul airport is completely in the hands of Taliban and they have declared their victory. On the other hand, the Taliban has made it difficult for women to survive once they come to power. Along with the ban on wearing jeans, now fatwas have also been issued in the field of education.

The Taliban has said that women will not only be allowed to study till college but there will be separate classes for both men and women. Meanwhile, US troops are withdrawing from Afghanistan, although there are still about 200 Americans in the country. Those who wanted to leave Afghanistan could not do so and are now completely dependent on the Taliban.