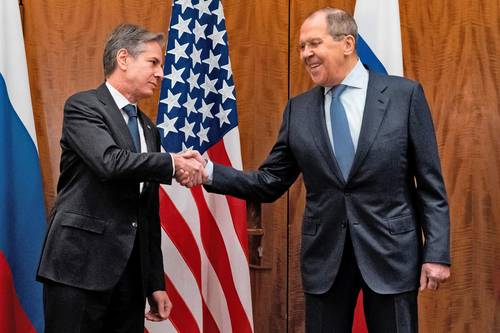 Geneva. The Russian Foreign Minister, Sergey Lavrov, and the US Secretary of State, Antony Blinken, determined yesterday, during the second meeting in Geneva between the two countries on the crisis in Ukraine, to increase efforts to normalize the functioning of the bilateral diplomatic missions, while they agreed meet again next week. An attempt is being made to defuse the international crisis resulting from the fact that Russia maintains 100,000 troops near the border with Ukraine, and demands that the North Atlantic Treaty Organization (NATO) not extend into Eastern Europe.

It was agreed to intensify the work of the experts to normalize the operation of the diplomatic missions of both governments and stabilize the visa regime, the Russian Foreign Ministry detailed in a statement.

He added that Moscow is in favor of the resumption of the full diplomatic presence and demands the return of the Russian diplomatic properties confiscated by the Washington authorities.

In December 2016, shortly before President Barack Obama (2009-2017) left the White House, his government expelled 35 Russian diplomats and ordered the closure of two diplomatic residences, the so-called dachas in Centerville, Maryland, and Oyster Bay. , New York, in response to alleged Russian interference in the US presidential election that year, which Russia repeatedly denied.

The nearly two-hour meeting in Geneva between the two top officials is the latest in a series of initiatives that began with two telephone conversations between Russian President Vladimir Putin and his American counterpart, Joe Biden, in December. This time, there was less confrontational rhetoric about the security of Eastern Europe. Calling the tone of the meeting frank and substantial, Blinken assured Lavrov that Washington would give written answers next week to Moscow’s demands that the West reduce its military presence in Eastern Europe.

Blinken agreed to put ideas on the table next week, but did not say whether they would meet the Russians’ detailed security demands, though he warned there would be a response even in the event of non-military Russian aggression against Ukraine.

He asked the Russian authorities to show that they have no intention of invading their neighbor and a very good way to start would be to push their troops back from the Ukraine border.

The Kremlin denies any warlike intention, but conditions the de-escalation to the signing of treaties that guarantee the non-expansion and withdrawal of Eastern Europe from NATO.

The Russian Foreign Ministry warned that if the West continues to ignore Russia’s legitimate concerns, there will be serious consequences that can be avoided if Washington reacts positively to our draft agreements on security guarantees.

US officials have asked their Russian colleagues to keep the document on reciprocal security guarantees in Europe secret, according to a statement quoted by The Washington Post.

Dmytro Kuleba, Minister of Foreign Affairs of Ukraine, said that it is good to know that diplomatic contacts with Russia remain active.

As a sign of the complexity of the situation, on the day of the negotiations, Russia decided to insist on the withdrawal of foreign troops from NATO countries that joined after 1997.

Naval maneuvers by both sides

Moscow specifically mentioned Bulgaria and Romania, although the list includes 14 countries from the former communist bloc. Romanian government spokeswoman Oana Lungescu found the demand unacceptable, and the Atlantic Alliance rejected it on the grounds that such a withdrawal would create first- and second-class NATO members.

Despite the meeting, the Pentagon announced that NATO troops will carry out large-scale naval exercises in the Mediterranean on Monday with the participation of the US aircraft carrier USS Harry Truman, while Russia also announced naval exercises at the same time in the Black Sea.

The Ukrainian military intelligence service accused Russia of continuing to bolster the fighting capabilities of pro-Russian separatists in eastern Ukraine, with tanks, artillery systems and ammunition. Moscow is considered, despite its denials, as the support of these fighters, which has left more than 13,000 dead since 2014, when it annexed Crimea.

The speaker of the Russian lower house, Viacheslav Volodin, announced that the parliament will debate next week a request for Putin to recognize the independence of the separatist territories of Donetsk and Lugansk.

Ukrainian President Volodimir Zelensky has warned that Russia could carry out an attempted occupation of the city of Kharkov, in the northeast of the country, noting that this could be the beginning of a large-scale war.

German Chancellor Olaf Scholz and British Prime Minister Boris Johnson have warned Russia that it will have to bear costs in the event of military aggression against Ukraine.