Video: The situation at Kabul airport is appalling, plane crashes 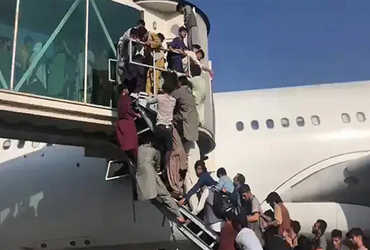 The fears that the whole world was talking about for many days about Afghanistan, came true on Sunday. After capturing Kabul, the Taliban recaptured Afghanistan after 20 years. Due to the withdrawal of Taliban, there is a state of panic in the whole of Afghanistan including Kabul and people want to leave there at any cost.

The Taliban believes that the ambassadors in Kabul need not fear, but Taliban terror has somehow captured the hearts and minds of the people, as has happened at the Kabul International Airport. There was chaos at Kabul International Airport and crowds at the airport were eager to board the plane to leave Afghanistan as soon as possible. There NATO countries decided that all commercial flights over Kabul would be suspended and Kabul airport would now be used only for the military.

This will be the name of Afghanistan

Air India flight AI126 from Chicago to Delhi made a sudden U-turn over Afghan airspace over Mazar-i-Sharif a while back. The plane is currently in airspace in Turkmenistan. It is not yet known what he will do after leaving office.