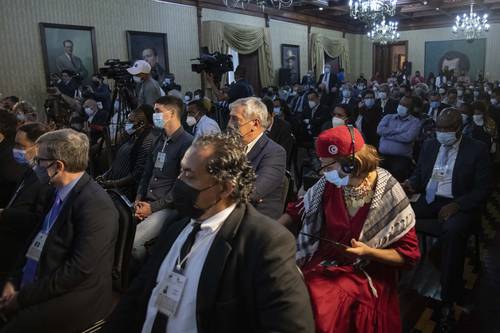 Caracas. The Defense Minister of Venezuela, Vladimir Padrino, reiterated yesterday that the entire security operation for the municipal and regional elections this Sunday is guaranteed. For this day, 14,262 voting centers and 30,206 tables are installed, in a process in which 87 political organizations of all tendencies participate, with more than 70,000 candidates.

The president of Venezuela, Nicolás Maduro, highlighted yesterday the strength and transparency of the automated voting system launched by the National Electoral Council (CNE) of this country.

In a meeting with international observers at the Miraflores Palace, the president emphasized the auditable nature of each of the stages of the regional and municipal elections.

More than 300 people from 55 countries meet as international observers. After 15 years, the European Union (EU), the United Nations and the Carter Center will monitor the elections, in which the government will seek to maintain most of the positions, while the opposition aspires to position itself in the political arena, after more three years without participating in electoral processes.

The last international observation was made in the 2006 presidential elections, because the CNE later changed that figure for electoral accompaniment, which led to missions such as the EU not accepting to witness elections in this South American country.

In his Twitter account, Padrino pointed out that the Republic Plan for citizen protection and infrastructure is already underway with the troops deployed and active.

Here we are reviewing the entire deployment of the Bolivarian National Armed Forces (FANB). We are on the wheel, everything is going very well. The custody of the material and the security of the voters duly guaranteed, he stressed.

Similarly, he invited the Venezuelan people to exercise their right to vote and stressed that the conditions are fully met from a technical point of view.

A total of 356 thousand 586 members of the FANB are deployed throughout the country to ensure today’s elections.

Likewise, the sale and distribution of alcoholic beverages nationwide is prohibited from Friday the 19th until tomorrow Monday, as well as the circulation of vehicles with a heavy load equal to or greater than 3.5 tons for 24 hours.

In addition, the circulation of vehicles for the custody and transport of valuables and the carrying of firearms and knives will be restricted. On the other hand, work with machinery may not be carried out on public roads and highways in the country.

The publication of opinion polls or polls to publicize voters’ preferences or voting intentions was suspended for seven days, in accordance with the Organic Law on Electoral Processes.

Likewise, the legal text prohibits the dissemination of electoral results by any means of social communication before the National Electoral Council issues its first official bulletin. Any citizen may denounce the commission of any electoral crimes, misdemeanors or illegal.

These elections have been known as mega-elections because of the number of positions to be elected, although there will be no vote for president and parliament.

Some 20 million Venezuelans are entitled to vote for the occupants of 3 thousand 82 seats, among which are 23 governors, 335 mayors, 253 members of the legislative councils and 2,471 municipal councilors.

Seventy thousand 244 candidates compete, of which 329 will compete for the governorships, 4 thousand 462 for the mayors and 65 thousand 463 for the legislative councils and municipal councils. In addition, 37 national party organizations, 41 regional, three national indigenous and six regional indigenous parties participate. These elections are marked by the return of international observation and the participation of all oppositions.