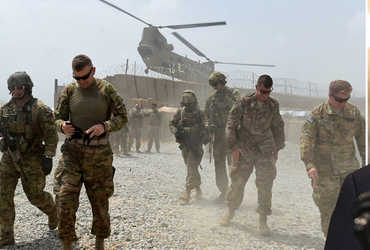 US forces withdrew from Afghanistan after the Taliban came to power. The Taliban, which has been in the process of withdrawing its forces since last May, has now taken control of all locations, including the Kabul airport. It may be recalled that after the US World Trade Center incident in New York in 2001, the US declared war on Afghanistan to eradicate the Taliban and establish a democratic government. The United States had an army of 3 million Afghan soldiers and a force of 1 million of its own. After spending billions of dollars, peace talks with the Taliban in 2016 paved the way for the withdrawal of troops from Afghanistan.

The Taliban maintained their existence despite the presence of American troops. On the one hand, American troops were slowly withdrawing from Afghanistan, while on the other the Taliban had occupied territories. In some places, such as Kandahar, Afghan forces fought, but in Kabul, US-trained Afghan forces were drowned. President Ashraf Ghani fled the country before the Taliban took control of Kabul and the commanders entered the presidential palace. The deadline for the US military to withdraw was August 31. Not long ago, at least 150 people, including 12 American soldiers, were killed in a bomb attack on the Kabul airport by ISIS, a terrorist group opposing the US-Taliban agreement.

Following the incident, it appeared that US forces might remain in Afghanistan longer, but instead, it withdrew on the night of August 30, before the August 31 deadline. According to the US Pentagon, the last soldiers left at night. Major General Chris Donahue was the last soldier to leave Afghanistan for the United States aboard a C-17 aircraft, marking the end of a long US military campaign. The commander of US Central Command, General Kenneth Menkeji, announced during a Pentagon news conference that the withdrawal process had ended. US President Joe Biden replied that in the past 15 days, our troops have completed the largest airlift operation in American history.