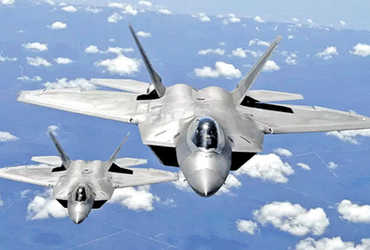 The F-22 Raptor is so dangerous that America has not yet sold its technology to any country in the world.

USS Cole will patrol the Gulf of Aden. According to US Army Central Command, we believe this is a friend’s help to another friend in distress.

US Central Command Commander Kenneth M McKenzie is currently on an official visit to the UAE. He said the presence of fighter jets and heavy aircraft is aimed at strengthening the UAE’s air defense system. The UAE is currently facing Houthi rebel missiles and drones.

The US general said the United States was working with its allies to find an effective solution to eliminate enemy drones before they can fly. Such a system would capture the launch of the drone. Will see him and disrupt his flight. If you can’t do that, you’re in for a treat.

The F-22 Raptor is the fifth generation fighter aircraft. It is considered one of the best fighter jets in the world. He joined the US Air Force on December 15, 2005. The United States has so far built 195 F-22 units. This aircraft is equipped with such dangerous technology that America has not sold it to any other country.