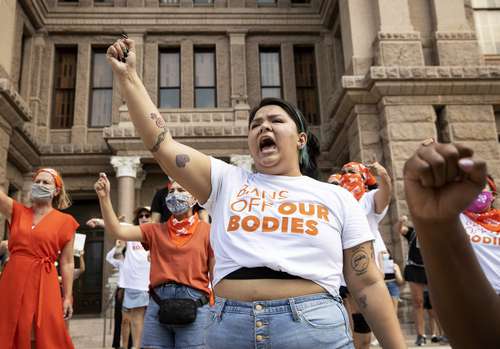 ▲ Protest outside the Capitol in Austin, Texas, against the anti-abortion law, in the week.Photo Ap

Washington. A deeply divided Supreme Court yesterday allowed a Texas law banning most abortions to remain in effect, stripping many women of their right to terminate pregnancy in the nation’s second-largest state, in the biggest setback to the right to decide in 50 years.

In a vote early yesterday morning, the high court rejected by five votes to four an emergency appeal presented by professionals to stop the application of the rule that came into effect yesterday. The magistrates suggested that this order may not be the last word, as other appeals may be filed.

Biden warned that his government will launch a government-wide offensive to respond to this decision and will study what steps the federal government can take to guarantee Texas women access to legal and safe abortion envisioned by Roe, in reference to the federal law of 1973 that decriminalizes abortion.

Texas lawmakers drafted the law to evade federal court review by allowing citizens in their personal capacity to file civil lawsuits in state court against anyone other than the patient involved in an abortion. In other laws against abortion, it is state and local officials who ensure compliance, with possible criminal penalties.

At least 12 other states have introduced bans on the matter, but all have been blocked.

In reaching this conclusion, we emphasize that we do not intend to definitively resolve any jurisdictional or substantive claim in the plaintiffs’ case. In particular, this order is not based on any finding about the constitutionality of Texas law, and does not in any way limit other challenges, including state courts, the court indicated in an unsigned judgment.

Sotomayor called the decision of his conservative colleagues surprising. Faced with a request for a ban on a flagrantly unconstitutional law designed to prohibit women from exercising their rights and evade judicial scrutiny, a majority on Thursday have chosen to bury their heads in the sand, he wrote.

The result of the vote highlighted the impact of the death of liberal judge Ruth Bader Ginsburg last year and of then-president Donald Trump’s decision to replace her with conservative Amy Coney Barrett. Had Ginsburg been part of the court, the suspension of the law would have received five votes.

In a statement following the decision, Nancy Northup, director of the Center for Reproductive Rights, which represents professionals designated by law, promised to continue fighting this ban until access to abortion is restored in Texas.