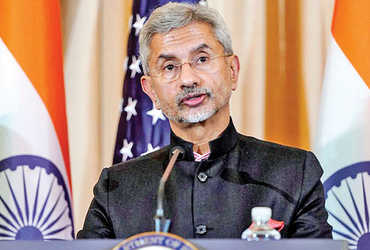 China had sent army on the border last year, which disturbed the peace, now it is a big challenge to improve relations: S Jaishankar

The world is entering a new phase of international relations and India is no exception. At the same time, he said that the power of China is increasing which will be a big challenge for the world, while on the other hand America is struggling to remain a superpower.

The foreign minister said that in the coming days, the growing power of China will be felt more than the global powers. Which will be a big challenge. Foreign Minister JG Crawford made this statement while addressing Oration 2021.

S Jaishankar also said that despite peace on the Chinese border for so many years, a large number of Chinese soldiers had come to the border last year. When India opposed this in June, there were clashes between the armies of the two countries. In which the soldiers of both the sides were martyred.

Which had a major impact on the bilateral dialogue and relations between the two countries. The big challenge at the moment is how to bring India-China relations back on track.