US Rs. Weapons worth 6.40 lakh crores seized by Taliban 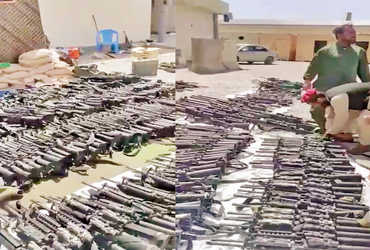 The Biden administration’s decision to withdraw US troops from Afghanistan has drawn criticism around the world, while the Republican Party has not missed a single opportunity to attack the US government.

Addressing a press conference in 2014-15, a former military officer who trained Afghan soldiers and police revealed several explosive information in recent days and a video clip of his press conference went viral on social media.

According to the official, US military officials in Afghanistan spent around Rs. Weapons worth 6.40 lakh crores (85 85 billion) have been thrown in America and all these weapons have now fallen in the hands of Taliban, America’s enemy.

Surprisingly, the Biden government currently has no plans to withdraw these weapons, planes and helicopters from the Taliban, he said.

The official said the US military has left 75,000 different types of guns, 200 aircraft and helicopters and 600,000 small and light automatic weapons in Afghanistan.

In addition to weapons and aircraft, helicopters, the US military has also downed night vision cameras and a large number of armored vehicles in Afghanistan. According to the official, the most shocking thing is that US military officials have left a biometric device and system in Afghanistan that contains biometric data of Afghan civilians helping US and NATO forces, in addition to local Afghans. The device includes eye scans, fingerprints of local Afghan citizens.

“In the days to come, if an American civilian or soldier is killed or injured by the Taliban, it will mean that our own civilians or soldiers have been killed by our own weapons,” the official said.