US retaliates for Kabul blast, kills ‘conspirator’ IS terrorist in airstrike 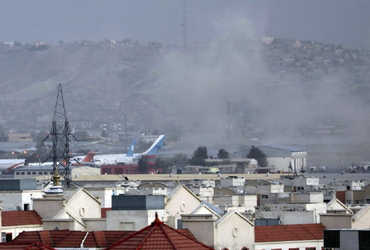 On Thursday, 169 Afghan civilians and 13 US soldiers were killed in a series of explosions outside an airport in the Afghan capital, Kabul.

The US has ordered evacuation of people from Kabul airport after the airstrike. US fears another terrorist attack at Kabul airport. The Pentagon has claimed responsibility for the attack. The ISIS-K base was attacked with a drone.

BREAKING: US airstrikes targeted Islamic State in Afghanistan in response to a deadly attack on Kabul airport, according to the Pentagon. https://t.co/a2PmPNds94

At least 169 Afghan civilians and 13 US soldiers were killed on Thursday in a series of bombings outside an airport in the Afghan capital, Kabul. Terrorist organization ISIS-K has claimed responsibility for the suicide attack. However, the US retaliated within 48 hours. The Taliban distanced themselves from the US move.

Biden said – those responsible will not be forgiven

The US has said that it will not forgive those responsible for the attack. President Joe Biden said America will take revenge. The price will have to be paid. However, the US still has no evidence of the complicity of the Taliban and the Islamic State in the attack on the Kabul airport.