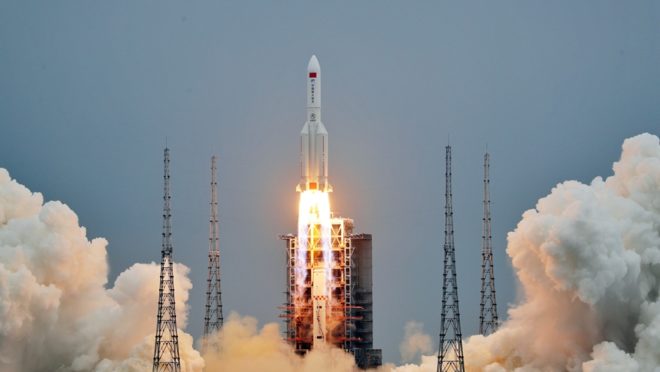 Wenchang Space Launch Center, where a Long March-5B rocket was launched to launch the central capsule of the Chinese space station, which is starting to be built. Photo: Disclosure / National Space Administration of China

The United States Space Command said Tuesday (4) that it was monitoring a large part of a Chinese rocket that is expected to enter Earth’s atmosphere on Saturday. It is not yet possible to know where the debris will fall. Last year, NASA criticized the Chinese space agency after debris from the main part of a Chinese rocket of the same type crashed in Côte d’Ivoire, Africa.

“The US Space Command knows and tracks the location of the Chinese Long March 5B in space, but its exact point of entry into Earth’s atmosphere cannot be determined until a few hours after its re-entry, scheduled for May 8,” Pentagon spokesman Mike Howard said.

The large Chinese rocket was used to take the central capsule of the Chinese space station, which is under construction, into space last week. The size of the 22-ton rocket raises concerns that large parts of it will not be destroyed by the heat of re-entry into the atmosphere and could reach inhabited areas, although the risk is very low, experts say. .

Macron recognizes France’s responsibility for the genocide in Rwanda