US military says several planes were wrecked before leaving Kabuli 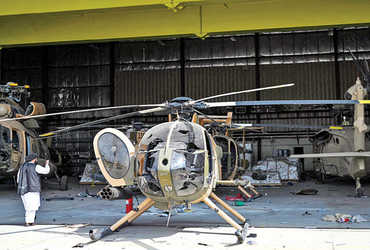 Mackenzie says 73 planes and 70 armored vehicles have been completely destroyed at Kabul airport.

Washington: US forces withdrew from Afghanistan before the August 31 deadline. The Taliban celebrated a grand celebration after the last US military plane took off at Kabul airport. However, he was unaware that he was given a tough fight by the US military.

In fact, before leaving Afghanistan on Monday, the US military destroyed a large number of aircraft, armored vehicles and a high-tech rocket defense system at Kabul airport. This was announced by a senior US military official.

McKenzie further elaborated that since the United States had deployed 6,000 troops to Kabul airport when the rescue operation began on August 14, the 70 armored vehicles parked at the airport were also completely rendered useless. The cost of one such vehicle is around 1 million.

In addition, 27 Humvee vehicles were also made completely unusable, and these vehicles were disabled in such a way that no one could use them in the future. The United States also dropped anti-rocket artillery and anti-mortar C-RAM systems at Kabul airport, which were used to protect the airport from rocket attacks.

Islamic State militants fired five rockets at Kabul airport on Monday, but the system was used to thwart those attacks and secure Kabul airport. “Breaking down a system like this is a long and complicated process, so we can’t make it civilian,” McKenzie said.

US troops remain in Afghanistan for a secret mission

America is working its disguise to rescue people trapped in Afghanistan

Kabul: America has announced that it has withdrawn its troops from Afghanistan. However, according to a report, foreign troops are still present in Kabul, Afghanistan. They are going to run a covert operation now. The purpose of which will be to rescue the trapped citizens.

200 Americans are still stranded in Afghanistan and thousands are unable to leave the country. These soldiers are in contact with each other outside Afghanistan as well. The goons are changing their costumes and working with the shepherds.