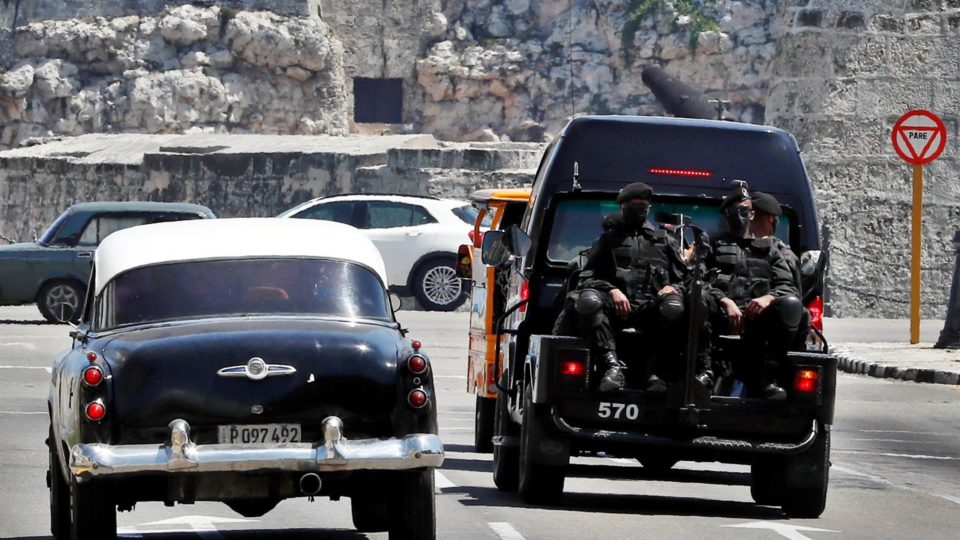 Police officers from a special brigade in a vehicle on the street in Havana, Cuba, July 21 | Photo: EFE / Ernesto Mastrascusa

The United States on Friday imposed sanctions on Cuba’s Revolutionary National Police (PNR) and two of its leaders, as US President Joe Biden prepares to announce measures related to the island’s internet.

The US Treasury Department announced in an official note sanctions against the PNR, its director, Oscar Callejas Valcarce, and its deputy director, Eddy Sierra Arias. They are believed to have reprimanded the demonstrations against the Cuban government that took place on the 11th.

The announcement came an hour before Biden welcomed a group of Cuban Americans to the White House, a meeting in which he planned to announce measures on internet access in Cuba and possibly on sending funds to the island, according to a senior government official. level.

“We will announce measures to improve internet connectivity on the island, to ensure that we support the ability of people to communicate with each other and receive information, which should be treated as a human right,” said the source, who requested anonymity. .

Biden also planned to give more details on two other issues he asked his team to investigate: the possibility of re-authorizing remittances to Cuba, which has been banned since last November, and the possible transfer of more than staff to the US Embassy. Havana.

Today is the second round of sanctions imposed by the US government following the July 11 protests in Cuba. Last Thursday, the Treasury Department punished Cuban Revolutionary Armed Forces (FAR) minister Álvaro López-Miera and an elite military unit known as the “black wasps”.

Biden said at the time that the move was “just the beginning” of his response to those who allegedly cracked down on this month’s protests. The government official who requested anonymity said today that the new restrictions are intended to keep the conversation going on “the rights of the Cuban people.”

The sanctions block any assets that members of Callejas, Sierra or PNR may have under U.S. jurisdiction and prohibit any American or resident from having a relationship with them.