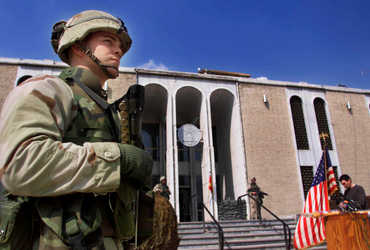 As the Taliban’s dominance in Afghanistan continues to grow, the United States has sent Marine commandos to evacuate its staff and civilians from the US embassy in Kabul, instructing embassy staff to destroy sensitive documents.

The US embassy in Kabul has been instructed to evacuate American citizens as well as destroy objects that could be used by the Taliban as propaganda or the American flag. The notices issued to embassy staff have called for using methods like burning, tearing and throwing documents in the dustbin. The US State Department in Washington has also started preparing for the crisis. And steps have been taken to assist the US Embassy in Kabul.

Britain’s Defense Secretary, Ben Wallace, on the other hand, said that the US decision to withdraw its troops from Afghanistan was a mistake, which gave the Taliban a great opportunity to wreak havoc across the country. Wallace said the deal by former US President Donald Trump’s administration to annex Doha, Qatar was a bad deal. I naturally thought this was a big mistake when dealing with Trump instead of dealing with the Taliban. The international community will probably have to bear the brunt of this mistake.