US defeat is a great lesson for other invaders, warns Taliban 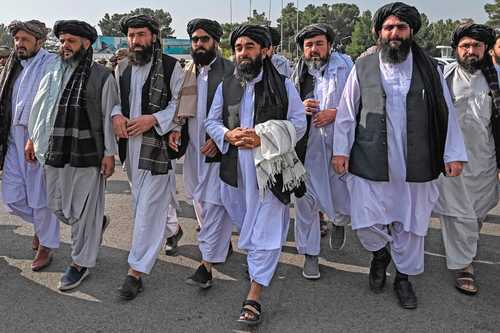 ▲ Taliban spokesman Zabihullah Mujahid (center, holding shawl), arrived yesterday accompanied by officials to a press conference at Kabul airport, following the departure of the last US soldier from Afghanistan after 20 years of occupation. Afp photo

Kabul. Celebrating the withdrawal of the last US troops after 20 years of military occupation, the Taliban asserted yesterday that the defeat of the United States is a great lesson for other invaders and victory belongs to all.

The fundamentalist group made a triumphant tour of Kabul International Airport hours after the withdrawal of Western troops. Standing on the tarmac, its leaders promised to secure the country, reopen the air terminal and give their rivals amnesty, but a large part of the population fears that these conditions will not be met.

We are proud of these moments, of having liberated our country from a great power, declared Zabihullah Mujahid, a spokesman for the Islamists, after a C-17 military transport plane took the last troops away just before midnight in Kabul. .

The US withdrawal is described as a historic success by the Taliban, who gained control of Kabul on August 15 and deposed the Afghan government after a swift nationwide offensive.

The Americans intervened in Afghanistan in 2001 with the support of the North Atlantic Treaty Organization (NATO), with the aim of overthrowing the fundamentalist group, which they refused to hand over to the leader of the Al Qaeda network, Osama Bin Laden, after the attacks of September 11. The invasion ousted the Taliban from power and prevented the Central Asian nation from being used as a base by Al Qaeda to attack the United States.

During their rule, the Taliban implemented a strict interpretation of Islamic law since 1996, and exerted great oppression on women. After their return to power they have made an effort to give a conciliatory image, with the promise of a more moderate government and pardons for those who worked with the previous government.

We want good relations with the United States and the world, Mujahid stressed, while rejecting the existence of a provisional government. About the airport, he said: if we can arrange everything on our own, we will not need support. If technical or logistical assistance is needed to repair the destruction, then we will ask Qatar or Turkey for assistance.

Hekmatula Wasiq, Taliban leader, assured: the military and civilian side (of the airport) are with us and under control. We hope to announce the formation of a government. Everything is peaceful. Everything is safe. He urged people to return to work and reiterated his promise to grant amnesty.

The members of the group fired from the early hours of the day round after round of ammunition in triumph, while the new airport guards drove away the curious and those who still aspired to take a flight to leave.

In Kabul people made long lines at banks closed since the fall of the capital with the intention of getting some money. A mock funeral was held in the streets of the eastern city of Khost with coffins draped with US and NATO flags.

In the southern city of Kandahar, the birthplace of the Taliban, there were demonstrations of joy in the streets. Although the majority of the population was happy about the end of the war, many feared for the immediate future, with the economy as the most pressing issue.

NATO considered it essential to keep Kabul airport open and promised not to forget those who want to flee the regime, while France and the United Kingdom admitted that they left people behind.

The United Nations Organization warned of a humanitarian catastrophe in Afghanistan, while the EU debated how to prevent a migratory wave of Afghans and spoke out for helping the neighboring countries of the Central Asian country.

China affirmed that the withdrawal of US troops meant opening a new page for this country.