US corona cases and death toll forecast for the month 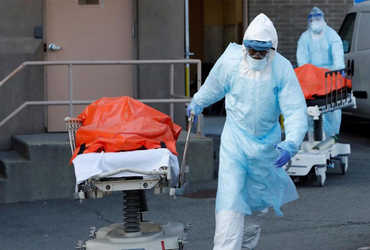 Tokyo’s uncontrollable Corona Paralympics will be without spectators

WASHINGTON: The US Centers for Disease Control and Prevention (CDC) has warned that a highly contagious delta variant could lead to a sharp increase in hospitalizations of corona patients and deaths from corona next month.

The National Ensemble Forecast by CDC provides region-wise statistics. According to the National Assembly Forecast, the total number of people who died of corona may increase from 630,000 to 6,62,000.

According to the data released by Johns Hopkins University, the total number of corona cases is 36,185,761 while the death toll from corona is 6,18,454. According to the CDC, 50.1 percent of the US population, or more than 166 million people, have been vaccinated against coronavirus.

Corona vaccines have been shown to be less effective against this type. In other words, the UK needs to achieve a high level of vaccination if it is to control the coronavirus pandemic.

Meanwhile, a member of the Tokyo Metropolitan Government’s Corona Virus Advisory said that it is now impossible to control the corona infection in Tokyo. In a meeting with Tokyo Governor Yuriko Koike, the city and national governments considered extending the state of emergency in Tokyo.

The Japanese government is also planning to hold the Paralympics in Tokyo without spectators. Sports fans may be allowed to attend when the number of coronavirus cases is low, but with 15,812 new coronavirus cases reported in Tokyo on Wednesday, that doesn’t seem likely.

Australia’s capital Canberra has been locked down for a week after a corona patient was found. Cases of the delta variant in Sydney are now spreading to other regions as well. The first case of corona has come to light outside the hotel quarantine system in Canberra after a year. It is not yet known what he will do after leaving office.

In the week ending August 5, the total number of corona cases worldwide exceeded 200 million. It took just six months to reach the 200 million mark after the 100 million mark. In this week alone, 42 million new cases have been reported in Corona and 65,000 deaths have occurred.