US airstrikes on IS terrorists in Kabul 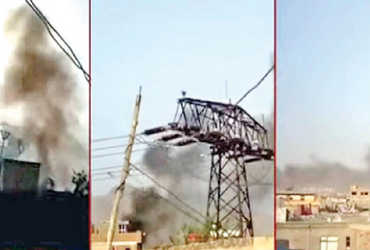 US warns of more terrorist attacks at Kabul airport before Tuesday

Three including a child killed in IS attack in Khorasan

Kabul: Another explosion occurred on Sunday in Kabul, the capital of Afghanistan. The attacker attacked a residential area near Kabul airport shortly after noon. The US military says a car bomb exploded at an Iraqi police recruitment center in Kisak, west of Mosul.

The bomber struck in front of a US military base shortly after noon. It is reported that three terrorists, including a child, were killed in the attack. Meanwhile, the United States continued its campaign to evacuate people before the August 31 deadline. The Taliban killed a folk singer on Sunday amid fears that Afghanistan would be under Taliban rule after Tuesday.

Confirming the Taliban statement, US officials said the attack was aimed at IS-Khorasan militants in Kabul. US Central Command spokesman Bill Urban confirmed the attack.

He said the US military launched an airstrike on a vehicle in Kabul on Sunday. Three days after the IS-Khorasan terrorist attack outside Kabul airport that killed 200 people, he again plotted to attack the airport.

According to locals, the blast took place in a residential area north of the airport. The BBC has also confirmed the rocket attack, quoting a health ministry official. A video of the attack quickly went viral on social media, in which black smoke and flames could be seen rising from a house in a residential area.

After two bombings by IS-Khorasan suicide bombers outside Kabul airport, US President Joe Biden warned of finding and killing every terrorist involved in the plot. The US has since attacked IS-Khorasan terrorists for the second day in a row.

Meanwhile, a US military cargo plane continued its operation to evacuate American civilians and Afghans from Kabul airport on Sunday ahead of Tuesday’s deadline. It is said that America had evacuated a thousand people on Sunday. The United States has announced that it will withdraw its troops from Afghanistan by August 31 after a two-decade-long war.

Thousands of civilians in Afghanistan fear the Taliban regime since the departure of US troops and are being harassed by the old Taliban regime. In this, a Taliban fighter shot and killed a folk singer Fawad Andrabi in the Andarabi Valley of Baglan province. Taliban spokesman Zabihullah Mujahid said the incident would be investigated and the killer punished.

Taliban preparing to form government if US withdraws

Kabul: The Taliban announced on Saturday that it would announce a new government next week and is expected to halt the economic slowdown and depreciation of the Afghan currency that began with its arrival.

Taliban spokesman Zabihullah Mujahid said in a statement that the US was continuing its efforts to evacuate its civilians and withdraw its forces from Afghanistan and was ready to leave the country before the August 31 deadline.

The mujahideen condemned the US drone strike on Islamic State militants after the suicide attack on Kabul airport on Thursday and called the move an attack on Afghanistan.

A Taliban spokesman called on the United States and other Western countries to maintain diplomatic relations after withdrawing their forces. He also expressed hope that US and Western forces would soon evacuate Afghanistan. On the other hand, the arrival of the Taliban in Kabul has caused a serious economic crisis due to the depreciation of the Afghan currency and rising food prices, as well as the closure of banks.

Mujahid said officials have been appointed to manage key institutions such as public health institutions and education, as well as the central bank. However, the United Nations has warned that drought-like conditions in many parts of Afghanistan could lead to humanitarian problems. Afghanistan’s economic situation has deteriorated after four decades of bloody war.

In addition, millions of dollars in aid to Western embassies in Kabul are about to be stopped. Mujahid said the economic situation could improve after the formation of the new government. The depreciation of the Afghan currency against foreign currencies is temporary and is due to a situation which is expected to improve rapidly.

UN Security Council refrains from referring to Taliban as terrorist

United Nations: Two weeks after the capture of Afghanistan’s capital Kabul, the United Nations Security Council (UNSC) has changed its stance on the Taliban. UNSC has removed Taliban as terrorist in its latest statement on Afghanistan issue.

Indeed, a day after the capture of Kabul, the UNSC on 16 August issued a statement on Afghanistan urging the Taliban not to support terrorism in its territory, but the UNSC condemned the August 27 attack on Kabul airport. A statement has been issued.

The change in the attitude of the UNSC is an indication that India is currently chairing a full-fledged UN Security Council for the first time. On August 27, the second day after the Kabul attack, India’s Permanent Representative to the United Nations TS Tirumurti issued a statement from the Presidency of the UNSC.