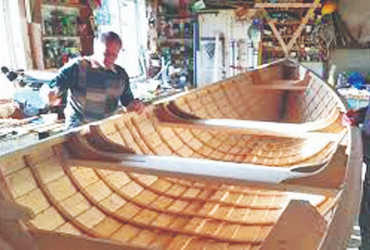 Thousands of years ago, the Vikings traveled for several days in a wooden clinker boat

New Delhi,
For thousands of years the peoples of Northern Europe carried wooden boats and expanded their trade and influence to almost all the seas and continents. In December, the United Nations Cultural Agency included the Nordic clinker boat in its human cultural heritage. Denmark, Finland, Iceland, Norway and Sweden have jointly submitted one such proposal to UNESCO. This resolution has also been passed.

Curious about the Viking’s legacy, he hopes the move will help preserve boat building technology. At a time when there is a steady decline in the number of craftsmen making clinker boats and the number of fishermen using such boats, they believe that this type of heritage can be preserved only by inclusion in the World Heritage List. Is. At present, all fiber boats are being selected. It is believed that this type of skill will be lost because of this.

“We can see that it required special skills to build and operate it,” said Soren Niels, head of the boatyard at the Viking Ship Museum in Rosklade, west of Copenhagen. There are very few people with this kind of information now.

The museum displays boats dating back thousands of years, as well as works on the reconstruction and reconstruction of Viking boats. The experimental process involving the use of experimental archeological methods provides an increasingly practical understanding of the Viking Age. How fast did these ships float and how many people could they carry.

Nielsen, who specializes in building and repairing boats according to the clinker tradition, said that there are currently about 50 clinker boat craftsmen in Denmark and about 200 in northern Europe. Thus, UNESCO has tried to preserve the fading heritage here.