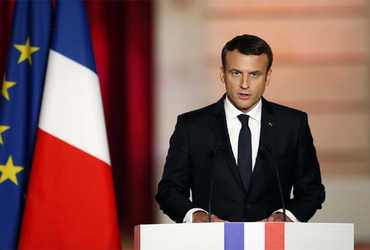 No plans to invade Ukraine: Russia

Minx agreements were signed between Ukraine, Russia, Germany and France during 2014-15 after the annexation of Crimea by Russia

Kiev: French President Emmanuel Macron said yesterday (Tuesday) that the leaders of Russia and Ukraine have shown their commitment to abide by the Minx agreements.

After this, there may be opportunities for further talks. He was speaking at a joint press conference in Kiev after long talks with Ukrainian President Volodymyr Zelensky.

At this stage, it is noteworthy that a set of agreements were drawn up in the Russian capital Minsk during 2014–15, after Russia annexed the Crimea peninsula, and signed by the leaders of Ukraine, Russia, Germany and France. it was done.

The agreements also include an end to the separatist war activities of Russian-speaking peoples living in the Don-Bra region in the eastern part of Ukraine. It also included Russia’s refusal to help the people of the region.

Russia, on the other hand, has an army of thousands (reportedly more than 100,000 soldiers) on the Ukrainian border. The United States and its NATO allies have sent complete weapons and military equipment to Ukraine.

Importantly, Russia has declared that it has no intention of invading Ukraine.