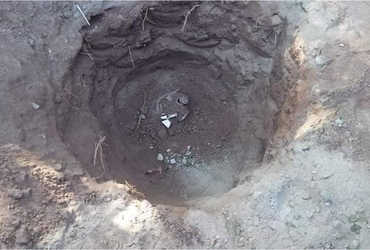 Two days after the bombing, there was a shootout near the entrance of Kabul airport.

Taliban control outside airport: Demonstrations by several people, including government employees, outside a bank in Kabul

The United States called for an end to the mastermind of the attack by launching drone strikes in Afghanistan within six hours of the attack on the Kabul airport. The US dropped a powerful drone bomb on Islamic State-Khorasan militants in Afghanistan’s Nagarhar province, blew up a terrorist’s rags and dug his grave there. The bomb was so powerful that it fell into a huge hole. On Saturday, two days after the explosion at the Kabul airport, there was a lot of chaos at the airport entrance and tear gas shells were fired.

The Islamic State’s deadly module detonated two suicide bombings outside Kabul airport on Thursday, killing more than 200 people, including 12 US soldiers and more than 150 Afghan civilians. After the attack, US President Joe Biden warned the terrorists that we will not forget the attack and will not forgive you. We will find and kill a terrorist. Within hours of his warning, the United States announced Saturday morning that there were “early signs” that we had killed the mastermind of the Kabul attack and that no civilians were injured.

Afghanistan’s news agency Aswaka News has also released pictures of the site of the drone attack. The attack took place at Kala-i-Nagarki in Nagarhar province. Photos show a burnt out car and a building. A big pit has been dug where the bomb fell. The White House says that President Biden does not want the terrorists who plotted the Kabul airport attack to stay on this earth for a long time. The White House said intelligence agencies had told President Biden and Vice President Kamala Harris that further attacks at Kabul airport were possible. However, security forces are on high alert at Kabul airport.

Meanwhile, on Saturday, two days after the Kabul airport bombings, another indiscriminate fire broke out near the entrance of the Kabul airport. Tear gas shells were also fired. After the incident, there is an atmosphere of panic and panic among the people. However, there is no clear information about the shooters and casualties. The Taliban, on the other hand, have tightened their grip on areas around the airport to prevent people from gathering outside the airport, as well as setting up new checkpoints on the roads leading to the airport. At some outposts, the Taliban have deployed Taliban fighters with night vision goggles and hummus confiscated from Afghan security forces.

Meanwhile in Kabul, several protesters, including several government employees, gathered outside a bank and protested. The protesters said that they have not been paid for three to six months. ATM machines are also empty. Facing an economic crisis, Afghanistan has set a limit of 500 per day for ATM withdrawals. According to a report by the United Nations World Food Program earlier this month, one in three Afghans in Afghanistan need food aid. Afghanistan is currently facing starvation. More than 1.5 million people in the war-torn country need help.

Dictatorship: China’s emphasis on adopting its language and symbols in Tibet