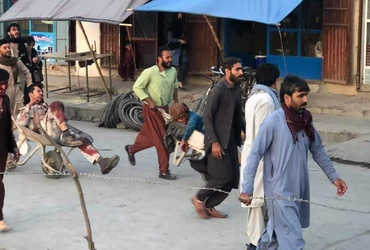 Countries including America, Britain and Australia had earlier warned of the attack.

Attackers fired at people standing outside Kabul Airport, children and women among those killed, American Marines injured, more than 50 injured

At least 17 people were killed and more than 50 injured in two suicide bombings outside Kabul’s Hamid Karzai airport on Thursday night, prompting warnings by the United States, Britain and Australia about an Islamic State (IS) terrorist attack. Middle. Children and women were among the dead and the death toll is expected to rise. Afghan civilians and some Americans were also among the injured. Earlier, the US had warned that the ISIS terrorist organization ISIS-Khorasan (K) was planning an attack on Kabul airport. Meanwhile, ISIS has claimed responsibility for the attack. The Taliban on Thursday detained former President Hamid Karzai and former Foreign Minister Abdullah Abdullah.

Several countries around the world, including the United States, Britain and India, are campaigning to airlift thousands, including their citizens, from war-torn Afghanistan to Kabul airport, and thousands of Afghans have gathered outside Kabul airport to flee the country. Huh. Fearing Taliban regime warned of terrorist attack. The American warning came true Thursday night.

Two IS suicide bombings at Kabul airport have revealed a heart-wrenching scene. IS terrorists also fired indiscriminately at people standing outside the airport. ISIS-Khorasan opposes peace talks between the US and the Taliban. Thousands of Afghans are hoping to seek refuge abroad despite the attacks outside the airport.

British Armed Forces Minister James Happy said thousands of Afghans had gathered outside Kabul airport to flee the country, while sources close to Islamic State in Afghanistan said they had received information from ISIS sources that they were planning a terrorist attack. were plotting. US intelligence agencies have also warned that IS militants could carry out suicide or car bomb attacks at Kabul airport. In addition, European countries including the United States and Britain have instructed their citizens to move to a safe place outside Kabul airport.

Significantly, the US and Britain have also confirmed the Taliban’s warning. Meanwhile, the Taliban have detained former Afghan President Hamid Karzai and former Foreign Minister and National Reconciliation Council Chairman Abdullah Abdullah in Kabul. The Taliban has also removed the security of the two senior leaders. Both leaders were involved in talks with the Taliban to form a new government in Afghanistan. Meanwhile, a Taliban spokesman denied reports that the two leaders had been detained.

Citing a CNN report, Russian news agency Sputnik said the Taliban had also confiscated the cars of the two leaders. Hamid Karzai and Abdullah Abdullah are now completely dependent on the Taliban. Earlier this week, the Taliban inducted Karzai and Abdullah and Taliban co-founder Abdul Ghani Baradar to its 13-member governing council in Afghanistan. The Taliban government in Afghanistan will also include Mullah Abdul Ghani Baradar, Mullah Mohammad Yacoub, son of Taliban founder Mullah Omar, and Khalil Haqqani, the most senior member of the Haqqani network.

Meanwhile, there is a state of chaos in Afghanistan since the takeover of the Taliban. Thousands of people gathered outside Kabul airport in the hope that the US and European countries would drive them out of Afghanistan. Due to this the prices of food items are skyrocketing. An Afghan citizen said that food and water were being sold at exorbitant prices.

At Kabul airport, a bottle of water costs Rs 50, or about Rs 5,000, and a plate of rice costs Rs 100, or about Rs 2,500. Surprisingly, these goods are not being sold in Afghan currency but in dollars. The crowd here is so much that the condition of women and children has become pathetic. Still people are waiting for their turn for hours and days.