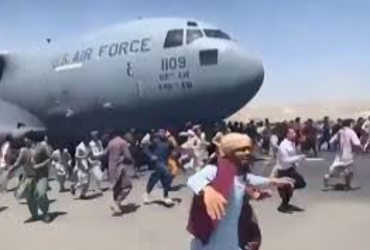 Afghanistan has re-entered the Taliban era after 30 years. Taliban supremacy has been feared ever since US forces began to withdraw from Afghanistan, but no one thought it would come true anytime soon. The Taliban have reached Kabul and the people of Afghanistan are asleep. Those who have seen the horrors of the Taliban rulers never want to live in Afghanistan. They want to catch a flight at Kabul airport at any cost and leave the country. The crowd at Kabul airport is reminiscent of any railway station or ST station.

Commercial flights have been forced to shut down to prevent overcrowding at Kabul airport. People were sitting on the runway trying to board a US military plane. Some were even hanging in the rear of the plane. Seeing the plane flying in the air, two people fell to the ground. At least two people have died at Kabul airport trying to leave Afghanistan. It was also reported that the US military tried to control the crowd by firing in the air at Hamid Karzai International Airport. It is learned that 4 people died in the chase that was triggered by the sound of gunfire.

The Taliban leaders seem to have changed a bit this time. He met Sikhs and Hindus at a gurdwara in Kabul and assured them that nothing would happen to them. However, Taliban rulers have repeatedly noted differences in their rhetoric. People are not ready to believe soon. The fact that President Abdul Ghani has fled the country is a moral defeat for the Afghan government. People are calling Abdul Ghani a coward. He left the country when he had to save Afghanistan. However, Ghani has made it clear through social media that he has decided not to shed blood and not to shed the blood of innocent people. The next two hours will be very important in the politics of Afghanistan.