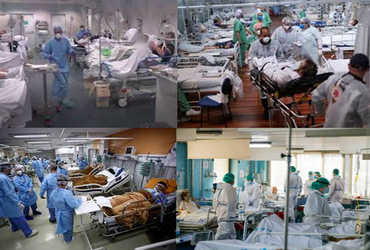 For the first time in Tokyo, more than 5,000 cases of corona were reported in a single day.

Meanwhile, the percentage of delta-type cases in the US has risen to 94 percent. Meanwhile, as the UK removes India from the Red List and Yellow List in its Corona traffic signal system, tourists traveling from India to the UK with both doses of coronavirus will no longer be in mandatory ten-day hotel quarantine Will happen.

Meanwhile, a rise in Delta-type cases will force Chinese leaders to change their costly strategy of isolating their cities. If the ruling Communist Party’s strategy to lock down China is implemented again, Wuhan’s 1.5 million people will lose contact with the outside world. Currently flights to Wuhan have been canceled and mass testing has resumed.

Meanwhile, 5042 new cases of corona were reported in Tokyo, the host city of the Olympics in Japan. People are no longer relying on the ban on alcohol and limited bar-restaurant hours as people are fed up with Corona’s control. Prime Minister Suga said that the number of daily coroner cases in Tokyo has crossed five thousand for the first time. The infection is spreading at an unprecedented speed.

A total of 236,138 cases of corona have been reported in Tokyo, taking the total number of corona cases across the country to 970,000, with 14,000 cases. Experts have declared a nationwide emergency after the rapid spread of corona infection.