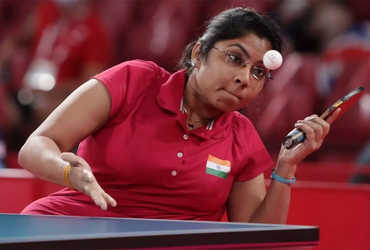 Will face China’s Zhang Miao in the semi-finals today

Tokyo: Gujarat’s para table tennis player Bhavna Patel has won a medal in the semi-finals of the Tokyo Paralympics. With this she has become the first Indian athlete to win a medal in future Paralympic table tennis.

In the Women’s Category 4 Division Singles event, she created history by winning the pre-quarterfinals and quarterfinals on the same day. With their entry into the semi-finals, their bronze medal was confirmed.

He will now face China’s Zhang Miao in the semi-finals. 34-year-old Bhavina Patel beat Brazil’s Joyce de Oliveira 12-10, 13-11, 11-6 in the pre-quarterfinals to reach the last eight.

With this, for the first time in Para Table Tennis, an Indian player has reached the quarter-finals. In the quarterfinals, she defeated world No. 5 Borislava Perich Rankovi of Serbia 11-5, 11-6, 11-7 in just 18 minutes.

In the Tokyo Paralympic table tennis, it has been decided to give bronze medals to both the players who lost in the semi-finals. Their semi-final is to be held tomorrow. Class 4 class athletes are able to sit in a balanced manner and have fully functional arms.