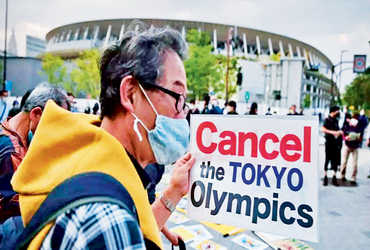 Opening ceremony to be held from 4.30 pm today Indian time: For the first time in the history of Khel Mahakumbh, spectators were absent

Organized Games in Tokyo, Japan despite protests from local people regarding Corona cases

Tokyo: After a year-long break due to Corona, the Games will start from tomorrow in Tokyo, the capital of Japan. The pandemic is still rampant and some athletes who have come to participate in the Olympics have become ill.

Only sports spectators are excluded from games, which are amidst the ‘new normal’ protocol, which includes wearing masks and social distancing. Only counting invitees will be present at the stadium during the opening ceremony, which begins at 4.30 pm IST, tomorrow.

People around the world, including Japan, will watch the opening of the Olympics and subsequent Games on TV and social media. More than 11,000 athletes from 205 countries are competing to win 339 gold medals in a total of 33 sports in the 18-day Tokyo Olympics.

Athletes as well as more than 10,000 coaches, officials and other support staff have reached Tokyo for the Tokyo Olympics to be held in an empty stadium without spectators due to Corona. The Tokyo Olympics will conclude on August 9. Locals are opposing the hosting of the Olympics after the cases of Corona increased in Tokyo, yet the organizers are adamant about hosting the Games.

There have been reports that the organizers of the Tokyo Olympics did not try to make the opening ceremony grand in view of the utter despair over the past year and a half due to the pandemic. Of course, as per tradition, the opening ceremony will see a colorful and musical expression of Japanese culture and civilization.