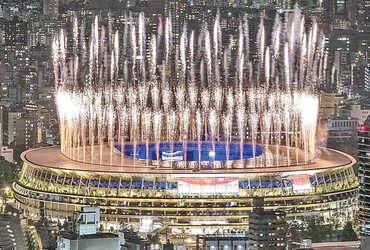 Closing Ceremony with Color Display and Laser Show: Now in France in 2024

US leads with 39 gold, China second with 38: India 48th, most challenging Olympics amid fear of Corona: IOC President

TOKYO: The closing ceremony of the Tokyo Olympics took place today amid a very emotional atmosphere, and it was announced by International Olympic Committee President Thomas Bach. Thomas Bach said it was the most challenging Olympics in Olympic history. He thanked the citizens of Japan and athletes from around the world.

Even the citizens of Japan heaved a sigh of relief as the case of Corona did not come to the fore, which caused a major setback. Japanese Prime Minister Suga also thanked the countries of the world for their strong morale as well as yeast. The next 2024 Olympics will be held in Paris. Of the 205 participating countries and the refugee team, 93 countries received medals.

Several players and officials from each country were asked to stop. Bajrang Punia led the Indian convoy in the closing ceremony of the pre-determined program. Several medal winners from over 90 countries, including players and officials, marched towards the stadium in turn. He seemed quite calm and cheerful. His medal was shown in front of the cameraman doing a flying kiss.

A fairly formal atmosphere was maintained. Players could not get a glimpse of Tokyo’s public life due to the Corona restrictions, so the stadium was set up in the same stadium, where there were scenes of common life and green grass, where citizens cycled as in everyday life. could see. Famous Japanese choirs and bands also performed on stage.

As part of the same event, three winners of the women’s and men’s marathon events were presented with medals by Thomas Bach and Vice President Anita, respectively. Late in the evening, as the torch flames subsided, the International Olympic Committee formally handed over the 2024 Olympic flag to the mayor of Tokyo, and Paris was filled with celebratory and welcoming Olympic banners.

The Olympics will be held in Paris in 2024, Los Angeles in 2028 and Brisbane in 2032. In the list of medals, the US tops the list with 39 gold, while China is second with 38. India is at 48th position with 1 gold, 2 silver, 4 bronze. Australian female swimmer Empa McOwn has become the most medal-winning athlete with 4 gold and 3 bronze. American swimmer Dressley won five golds. Kenya’s Kipchoge won the marathon gold medal at the second consecutive Olympics.

Karlovy Vary Film Festival with an award for Ethan Hawke |