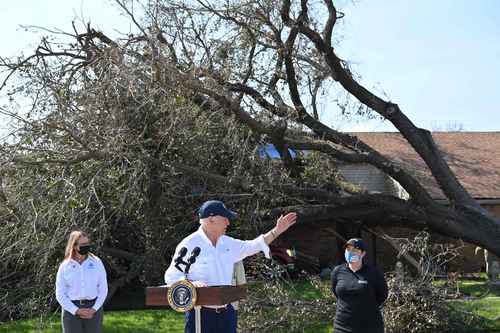 LaPlace, New Orleans. The president of the United States, Joe Biden, visited the southern state of Louisiana yesterday to assess the damage caused by Ida, which made landfall last Sunday as a hurricane, then turned into a storm that swept across the east coast and left 49 in its wake. dead and incalculable material damage.

36 hours after torrential rains wreaked havoc in and around the country’s main city, Biden met with Louisiana Governor John Bel Edwards and other local officials in the Cambridge neighborhood on La Place.

Things have changed dramatically in terms of the environment; A certain threshold has already been crossed, he commented under the intense, humid heat.

The president, who has made climate change a priority, toured damaged houses greeting, hugging and talking to residents. He argued that costly improvements to the levee system around New Orleans after Hurricane Katrina in 2005 have proven their worth in preventing further damage today.

The lines in the establishments of this state – some without electricity – extended by blocks. Some supermarkets rationed water, ice, bread, milk and other staples, while gasoline began to run low. A chain of pharmacies deployed mobile units to devastated communities to serve those most in need.

Commercial flights resumed in New Orleans and the electrical system was reinstated in parts of the city’s business district since Thursday.

Biden stated that we cannot rebuild roads, highways, bridges, anything, like before, we have to rebuild better. Projects that seek to transform, rather than repair, will have to become the new norm, he said when pushing for Congress to pass his $ 3.5 trillion infrastructure bill.

The president took an aerial tour of the state’s hardest hit communities, including Lafitte, Grand Isle, Port Fourchon and Lafourche Parish, before meeting with local leaders in Galliano, the White House reported.

The hurricane hit the U.S. Gulf Coast to the southeast on Sunday, first hitting the states of Louisiana, Alabama, and Mississippi, but then made its way north across the east of the country, bringing rain since Wednesday. torrential and widespread flooding in New York, New Jersey, Pennsylvania, Maryland, Connecticut and other surrounding areas.

Only in the northeast, where the population woke up fearful and in mourning, at least 49 deaths have been reported, which raised the overall balance to 65. The inhabitants of the eight states collected the damage caused by Hurricane Ida, while several areas they were still flooded, with submerged cars, houses, businesses and offices.

The police went from house to house in search of victims and made lists of the missing. Emergency crews were scrambling to remove stranded cars, clean up mud, clear debris and restore public transportation service. Parts of the New York City Subway system were still out of operation Thursday night.

The mayor of New York, Bill de Blasio, also warned about climate change: This storm must wake us up. This is a new challenge compared to the time when flooding was associated with coastal areas.

For New Yorkers, the chaos rekindled the memory of Hurricane Sandy, which in October 2012 left much of Manhattan without power and completely flooded subway transportation.