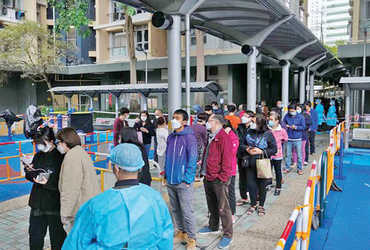 A sub variant named ‘BA.2’ has spread to 40 countries including India and Denmark: New cases of corona were reported in 1945 in Singapore.

LONDON: The Omicron variant is dominant in the UK, but the British Health Authority has identified thousands of cases of BA2, a new sub-variant of Omicron. The UK Health Protection Agency has identified more than 400 cases of this sub-version in the UK in the first ten days of January alone.

Cases of this sub-variant have been found in 40 other countries including India, Denmark and Sweden. The authority said there was a lot of uncertainty about the mutation in the viral genome, but there has been a recent increase in cases of this sub-variant in India and Denmark. In Denmark 33,835 new cases of corona were reported and 25 deaths occurred.

French epidemiologist Antoine Flaholt said, “The speed at which this sub-version is spreading is surprising to us.” BA2, which is widespread in Asia, has now gained a foothold in Denmark. He warned that countries need to be wary of this new sub-version. The authority has placed the rapidly expanding BA2 in the variant under investigation category.

Tom Peacock, a virologist at Imperial College London, said preliminary observations from India and Denmark showed there was no significant difference in the severity of BA1 and BA2 infections.