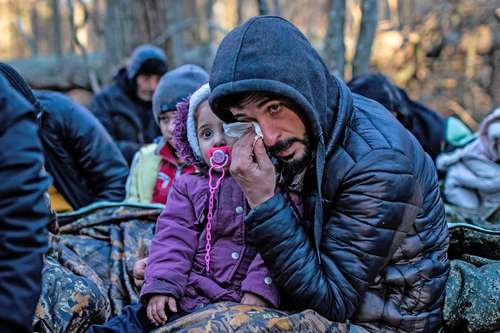 ▲ A father of a family of Kurdish origin, from Iraq, waits near the border with Poland after being mistreated by Belarusian guards. Afp photo

Warsaw. Thousands of desperate migrants are blocked on the border between Belarus and Poland, at the gates of the European Union (EU), a situation that yesterday generated great tension between both countries and also affected Russia, which according to Warsaw officials, is the one that orchestrates this crisis.

Enduring extreme low temperatures, between 3,000 and 4,000 asylum seekers, mainly Kurdish families with children, arrived at this border on the Belarusian side, near the Polish town of Kuznica, and only a few are waiting in a makeshift camp. In front of them, in Polish territory, a barbed wire fence and an important military device of more than 10 thousand troops deployed by Warsaw cut them off.

The Polish Defense Ministry reported that the calculation comes from aerial observations, although they have not been independently corroborated. According to our estimates, there could be between 12,000 and 15,000 migrants in Belarus, said Stanislaw Zaryn, spokeswoman for Polish special services.

The migrants – many of them families with children – come mostly from Iraq and Syria, although some have arrived from Africa in an attempt to seize the opportunity of a new route to enter Europe. Most only want to cross into Poland to cross the country and reach Germany or other EU countries. A group of migrants tried to break through on Monday, but were repelled.

People have described being hit with the butts of guns, kicked in the ribs, received electric shocks to the neck and having their few belongings taken from them by European border guards. This is unacceptable and must end now, said Kyle McNally, a humanitarian adviser for Doctors Without Borders.

In videos broadcast on Twitter, tents and bonfires were seen while Polish soldiers play with megaphones to alert the refugees: “Attention, attention … Crossing the Polish border is legal only at official points”, where visas will be requested.

The closest crossing, in Kuznica, in the northeast of the country, was closed yesterday. The situation was an escalation after months of migratory pressures on Lithuania, Poland and, to a lesser extent, Latvia, the three EU states on the eastern border of the bloc with Belarus.

The Polish Prime Minister, Mateusz Morawiecki, accused Belarusian President Alexander Lukashenko before the Parliament of his country of provoking a new refugee crisis in Europe by organizing the movement of migrants from the Middle East and promising them access to the EU, through Minsk , with the support of the President of Russia, Vladimir Putin.

Morawiecki went to the border in the morning with Defense Minister Mariusz Blaszczak to meet with border guards and other security officials, whom he praised, on behalf of the EU, for their effective defense of our border.

The European bloc accuses Luka-shenko of orchestrating the crisis in retaliation for the Western sanctions against him, which came into force after his controversial re-election in 2020. His stay in power led to major demonstrations in Minsk and a forceful repression by the authorities. .

In the midst of the crisis, the United States and the EU called on Belarus to halt what it called an orchestrated flow of migrants.

Lukashenko, a close ally of Russia, assured that his country will not kneel before the EU, although he also guaranteed that he was not looking for a fight, aware of the risks of adding fuel to the fire and causing an armed incident.

He assured in an interview with the Natsionalnaya Oborona magazine that Belarus has never planned to attack Poland, but does reproach him for failing to fulfill his humanitarian obligations by refusing to receive migrants.

During the day he spoke by phone with Putin about the deployment of regular Polish troops on the border. The Kremlin responded that it was closely watching the confrontation over the immigration issue.

Russian Foreign Minister Sergei Lavrov lamented the Western adventures in the Middle East that lead people to flee their homes and called for a unique point of view for migrants arriving in Europe.