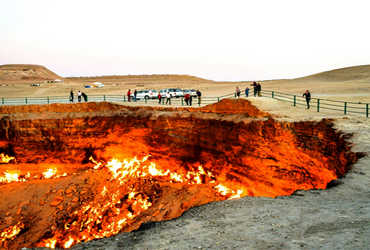 – The Soviet Union is to blame for the fire

To the north of Turkmenistan, a Central Asian country that was part of the Soviet Union, lies a giant crater known as the ‘Gates of Hell’. According to Turkmenistan President Gurbanguly Berdymukhamedov, they plan to close it.

The president, a dentist by profession, has instructed his ministers to find experts from around the world who can close the huge pit that has been burning for half a century. These pits were not there before. It has been there since 1971. The Soviet Union is to be blamed for this. The fire has been going on for 51 years.

After World War II, when its economic condition was not good, Soviet geologists came to the Karakum desert area to find crude oil reserves. They were also successful in finding natural gas reserves in many places. During the research, at one point the ground collapsed and 3 large potholes collapsed. There was a risk of methane gas leaking into the atmosphere. To stop this, a pit was set on fire. It is believed that the gas will run out and the fire will extinguish itself. But that did not happen. However, there is no evidence that this is true.

The 230-foot-wide spooky pit is still on fire, visible from miles away. It is also known as ‘Gates of Hell’ or ‘Mouth of Hell’. It is located about 160 miles north of the country’s capital, Ashgabat.

Fourteen scientists elected to the 2021 cohort of ASCB Fellows

Rush Named Top Hospital to Work for in Chicago

Google is working on a new Chromecast with Google TV with better hardware and AV1 support, according to 9to5Google