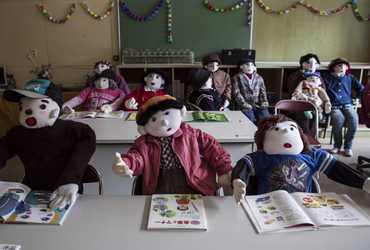 A vivid replica of two students leaving school has been created, not to mention a doll that looks like a teacher. The doll is called a scarecrow in Japanese. These beetles are found in courtyards, roads and fields. Some have even committed scams in the name of people leaving the village from their families.

Nagoro Village is known worldwide for its unique culture in Japan. Only 4 people live in this village, at one time there were 200 people but the village is slowly getting empty. The gold plated empty house is reminiscent of the once inhabited human settlement. The people living in the village are all alone. Although people who have left the village cannot be recalled as a remedy for loneliness, the elders living alone in Atul have made dolls to reduce loneliness. Small and large arranged dolls have replaced the ones of the past.

The doll is called a scarecrow in Japanese. These beetles are found in courtyards, roads and fields. Some have even committed scams in the name of those people who are leaving the village from their families. Some elders even talk about the doll being alive. About 10 dolls have been kept as replicas after a man. In the year 2013, there was a school in this village which was closed due to lack of children. The empty school is housed in a bizzo, so the whole school classroom seems to be full of dolls. In the end, a vivid replica of two students leaving school is created, not just a doll that looks like a teacher teaching in the classroom.

Dolls talking under telephone poles, dolls fishing on the banks of the river have become the center of attraction. Some tourists come to the village to see the curiosity. Some dolls are also scary, so those who are afraid are advised not to come. It took 12 years for the village of Nagoro to become a village of dolls. A woman named Tsukimi, who lives in the village, uses newspaper, plastic and cloth to make Bijuka. She also wears makeup and clothes on her cheeks.

Japan has always been known as a futuristic country. The whole world is stunned by the insistence on punctuality and discipline. According to the information received, urbanization is also increasing in Japan. Nagoro village is an example, many other villages are empty. Young generation is running away from marriage and its consequences. Either marry too late or choose to remain single. Workaholic culture is a big problem in Japan and the younger generation is dying.

Left alone Elders Suffering from loneliness, the people of Nagoro village have found a way to keep dolls to ease the pain of loneliness. The youngest person in Nagoro village is 3 years old. New dolls have been created to celebrate how vibrant and vibrant this village was before. The village of Nagoro was settled by the dam in 191 due to the hydraulic power project. The name of the village is Nagoro from this Nagoro dam.