The restaurant owner now has 969.6 billion . Is 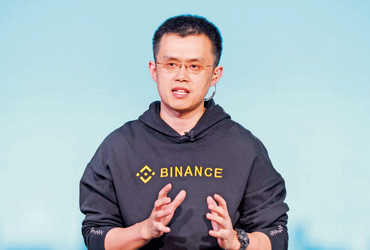 1300 percent increase in Binon in the last one year

New Delhi: A new billionaire has been added to the world of billionaires. This man is the world’s first cryptocurrency billionaire and his name is Changpeng Zhao. In the three years since the launch of Binance Coin in 2017, he has become the owner of 9,600 assets. Its currency has risen 1,300 per cent this year. While bitcoin has declined. His wealth has even surpassed that of Mukesh Ambani. The net worth of Mukesh Ambani is 89.89 billion.

As the name suggests, Changpeng is Chinese. But in reality his father was a professor and he faced exile for participating in the Cultural Revolution. As a result, Changpeng had to move to Canada with his father at the age of 17. he is Canadian. He has studied Computer Science. He has worked at McDonald’s.

He is said to be the first billionaire in the crypto world or the undisputed king of cryptocurrency since he started his cryptocurrency banking in 2017.

Zhao, 44, is now joined by Facebook’s Mark Zuckerberg, Google founders Larry Page and Sergey Brin. Zhao first became fascinated by cryptocurrency in 2013. At the time, he, along with then-CEO of BTC China Bobby Lee and investor Ron Kevo, had invested ten percent of his wealth in the cryptocurrency bitcoin. However, he had to sell his apartment at a loss.

He then launched his own cryptocurrency and today it is a crypto powerhouse. Binance is one of the leading cryptocurrency trading platforms in the world today. It rose above 170 billion in a single day, the best ever. Whereas it does an average of 40 40 billion transactions daily. Two years ago, he had deals worth tens of billions of dollars. Binance created 20 billion worth of assets last year.

However, with development comes controversy. Changpeng is no exception. Chinese officials are investigating. Even in the United States, regulators have followed suit, while in his native Canada, officials regularly threaten his company. But Zhao is currently the backbone of the Sheikh of Abu Dhabi.

Among the cryptocurrency giants, Satoshi 45 is topped by Zhao with 45.8 billion. Other crypto billionaires include Sam Bankman Fried with 15.4 billion, Brian Armstrong with 8.8.9 billion, Taylor Winklevoss with 5.1 billion, Cameron Winklevoss with 5.3 billion, Mike Novogratz with 5 billion and three others.