The Pyramids of Giza, the White House and the Eiffel Tower are also found in China 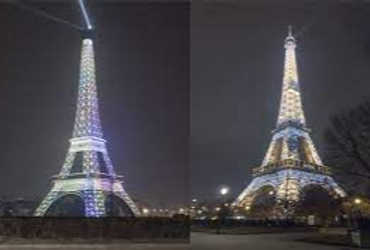 China specializes in making its products at home by copying various products of the world’s branded companies be it electronic toys or mobiles, computers and laptops, China makes cheap products and markets its products in developing and poor countries. World economists believe that China has benefited the most from globalization and free trade. Even so, owning one is still out of reach for the average person. Now China is copying not only in manufacturing but also in establishing tourist destinations. China has also built the Eiffel Tower, the Pyramids of Giza, Capitol Hill, London Bridge and Capitol Hill.

Seeing this picture, many people will think that the capital of France is Paris. Because the Eiffel Tower is its biggest identity. Although this view is not of Paris but of the Chinese city of Hangzhou. In this city, the Chinese government has built a replica of the Eiffel Tower in Paris. Tourists from home and abroad are also surprised. If it’s a traffic signboard, anyone will think it’s Paris.

In addition, a museum similar to the Louvre Museum in Paris has been established by Chinese and American architects in Shenzhen, southern China. The pyramid is located in Hubei Province, China. Citizens who are fascinated by the Pyramids of Giza and cannot visit can enjoy seeing a replica of Giza in Hubei Province.

America also has Capitol Hill and the White House

London Bridge is being built in the Chinese city of Suzhou. The replica of this London bridge is very famous. The Parthenon is the name of an ancient Greek temple. However, China has built an exact replica of a Greek temple in Chanchou, Gansu province. Surprisingly, this place is considered as part of the tourism and cultural heritage of the city.