The number of corona cases in the US has crossed 60 million with 8,37,664 deaths 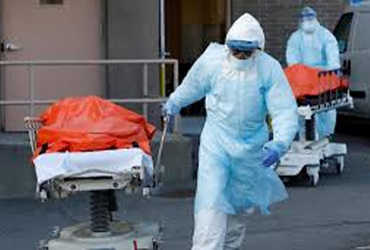 Then on 1 January 2021 it increased to Rs 2 crore and on 24 March it reached Rs 3 crore. On September 6, the number of corona cases reached four crore and on December 13 it crossed five crore. The first case of Omicron was reported in the US state of California on December 1, 2021.

On the other hand, 144,472 new cases of corona were reported in Britain, taking the total number of corona cases to 14,475,192, while the total death toll from corona crossed 1.5 million with 97 deaths. Kevin Fontaine, director of the Public School of Health in London, said Britain was at the peak of infection. Case rates have dropped in London.

Meanwhile, the cases of corona increased rapidly in the Philippines for the third consecutive day. With the registration of 33,169 new cases in Corona, the total number of cases reached 30 lakh today. A total of 52,293 people died after the death of 145 people. Health care has been disrupted as many health workers have been infected with Omicron.

Meanwhile, in Singapore, Health Minister Aung San Suu Kyi warned parliament that a “big wave” of omicrons was approaching Singapore. In which ten to fifteen thousand cases are expected to increase daily. So far 4,332 cases of corona have been reported in Singapore, in which 308 cases are related to patients above 60 years of age. Only eight patients needed oxygen.

China, on the other hand, has taken drastic measures after Omicron’s arrival in Tianjin, on the outskirts of Beijing. Schools were closed and travel restrictions were imposed after two Omicron cases were found on Saturday. Mass testing was also started over the weekend.

Two Omicron cases have also been reported in nearby Henan. Officials in Beijing are up in arms over the 21 new Omicron cases reported in Tianjin. With less than a month before the Winter Olympics in Beijing, a massive outbreak of Omicron could not be tolerated by the Chinese rulers.

Canadian military officials who attended the military games in Wuhan in October 2019 said that the city of Wuhan was haunted during the Games. Many soldiers who participated in the Games began to experience fatigue and difficulty breathing. Many Iranian military officers also lost their lives in the Wuhan Games.

On the other hand, in Uganda, 83 weeks, schools reopened after more than two years of closure. The closure of schools has affected the education of one crore children. In Uganda, schools were closed in March 2020. Some classes were started in February 2021, but schools had to be closed again in June due to the imposition of lockdown and increasing cases of corona.