The Minotaur, Ariadne and the myth 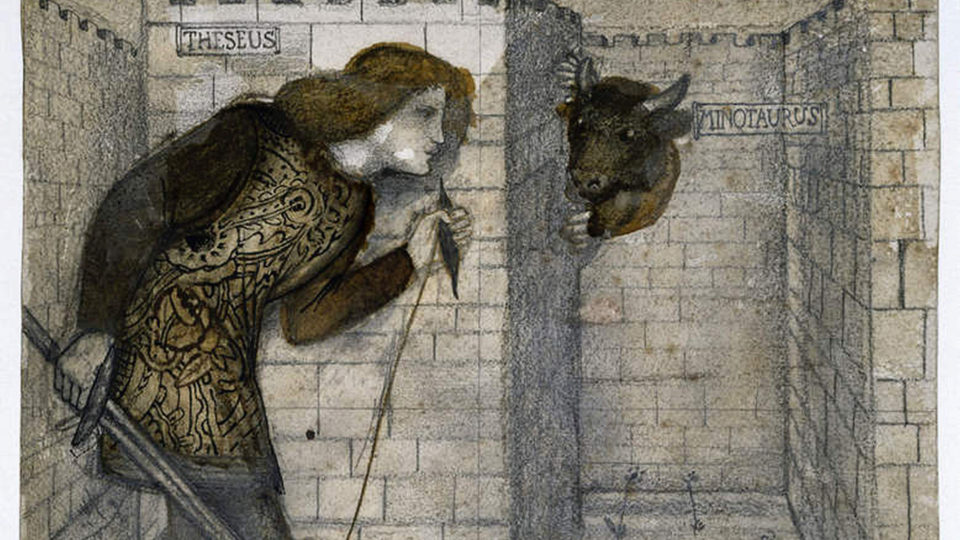 Theseus and the Minotaur in the Labyrinth | Photo: Illustration by Edward Burne-Jones / 1861

The Minotaur was an insatiable creature who lived in a labyrinth. According to tradition, the half-man, half-bull monster devoured anyone who ventured into its domains – a prison trap erected to keep the animal trapped while ensuring that unsuspecting or condemned people did not never break free from the complex network of corridors and passageways. this, besides being confusing, led the unwary to an inexorable destination.

The Athenian Theseus embraced the mission of ending the Minotaur, with the noble goal of preventing his countrymen from being delivered as spoils of war to satisfy the creature’s hunger. Theseus would have a certain encounter with death without the love at first sight of Ariadne, the daughter of King Minos, who commanded there. In addition to a sword, the young woman offered Theseus a ball of wool. Something extremely simple that would prove to be the most important weapon in saving the life of your loved one. Theseus annihilated the ferocious beast and conquered the impassable labyrinth, for Ariadne ordered him to mark the way back with the thread of this skein. Theseus was saved by the combination of intelligence and love.

Brasilia is a labyrinth. With the right to the center and Minotauro. From time to time, a Theseus seems to want to face the beast. But there is no love in BSB.

Never, but never, has an Ariadne appeared to help anyone get rid of the Brazilian labyrinth. Without a tangled up, facing the Minotaur and then finding the exit is an almost impossible task.

Who does not remember the election of former president Luiz Inacio Lula da Silva? Sword in hand, he promised to behead the beast. But what did you get? He invented the monthly allowance, the heist by Brazilian entrepreneurs and their Bolivarian cronies, elected Dilma Rousseff and never left the maze again. He was neither eaten by the Minotaur nor killed. Lula made love with the beast. Not out of love, but out of intelligence.

Jair Bolsonaro introduced himself as the current Theseus. He was chosen by a people left to fend for themselves in the same labyrinth. But there is no love in BSB. Therefore, there is no Ariadne who delivers a skein that shows the way. Without Ariane, intelligence and strategy were also lacking. Elements without which, courage and brute force are harmless against the Minotaur.

The Bolsonaro government seems to have understood that it does not have the necessary instruments to defeat the Minotaur, it survives in a kind of hide and seek with the beast. He sought refuge in the center, believing it to be the place where he would find strength and protection. But he found himself trapped in the part of the maze where the creature feels most comfortable and can always be on the lookout.

The 2022 elections have already started. And nothing happens inside and outside the labyrinth without looking at the electoral horizon. In fact, the elections started at instant zero, when the TSE confirmed Bolsonaro’s victory in October 2018. Whether through the president himself or through the opposition. Since then, not a day has passed without the government going into survival mode and the opposition and its non-partisan allies in a continuous effort of destruction.

This week, Jair Bolsonaro suffered a loss. He bet all his chips on the reform of the electoral process rejected by the deputies. But Bolsonaro lost on his own? Who really won?

Maze Brazil has become fertile ground for non-debate. Print voting has been politicized and the obvious precariousness of the electronic electoral system has become taboo. Disinformation and deliberate lies have sprung up from all corners. Bolsonaro, with his inability to express himself, gave his opponents the ingredients to paint a con man a measure that a con man had absolutely nothing. The printed vote was only a verification mechanism for the electronic vote. But he was imploded by sectarian politics.

But it was easy to bury the measure. With his speech “there will be no elections”, President Bolsonaro donned the hood of the coup. Show that Ariadne’s non-existence is also felt by the most absolute lack of intelligence and strategy.

But there is still a way out. Just as the TSE serves to remind us that there are no impenetrable electronic systems, we must also know that there are no mazes that cannot be overcome. Without a skein to mark the way, the task becomes more and more difficult – especially in a labyrinthine country.