The Kremlin intends to install a pro-Russian leader in Ukraine: GB 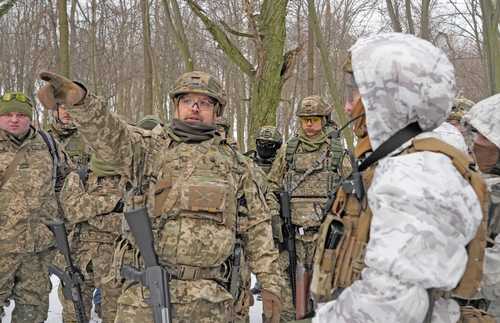 ▲ Dozens of civilians have joined Ukraine’s army reserves in recent weeks amid fears of a Russian invasion. In the image, a training of volunteer forces in a park in the city of Kiev. Photo Ap

London. Britain yesterday accused the Kremlin of seeking to install a pro-Russian leader in Ukraine and said Russian intelligence officials were in contact with several former Ukrainian politicians as part of plans for an invasion.

In a parallel event, some 90 tons of weapons and ammunition provided by the United States landed yesterday at the Ukrainian Boryspil airport, some 29 kilometers east of Kiev, in the first batch of additional aid for Ukraine approved in December by the House Blanca and that arrives at a height of tension with Russia over the increase in troops on the common border. Estonia, Latvia and Lithuania also sent weapons to Ukraine.

The British Foreign Office did not provide proof of its accusations, which are made public amid tensions between Russia and the West over Moscow’s likely invasion of the former Soviet republic, an assumption that has been denied by the Putin government.

Contradicting the British claims is that Murayev appears on the list of individuals sanctioned by Moscow, according to a 2018 report in which he is considered hostile to Russian citizens and companies, according to a Moscow decree identified with the number of folio 1,300. The information sheds light on the extent of Russian activity designed to subvert Ukraine, British Foreign Secretary Liz Truss said in a statement.

He added: Russia must reduce tension, end its campaigns of aggression and disinformation, and follow the path of diplomacy. As the UK and our partners have repeatedly said, any Russian military incursion into Ukraine would be a huge strategic mistake with serious costs.

The Russian counterpart dismissed the UK version as absurd in a statement in which it added: This disinformation by the British Foreign Office is further evidence that it is the NATO countries, led by the Anglo-Saxons, that are raising tensions around Ukraine. The document urged the parties to cease the provocations.

The British remarks come a day after Washington and Moscow foreign policy representatives Antony Blinken and Sergei Lavrov respectively failed to make progress in talks to resolve the Ukraine crisis, although they agreed to continue talking.

Russia has made security demands of the United States, including an end to the North Atlantic Treaty Organization’s (NATO) eastward expansion and a promise that Ukraine will never be allowed to join the Western military alliance.

Meanwhile, the US embassy in Ukraine confirmed the arrival of the plane whose cargo it described as lethal aid, including ammunition, for the defenders of the Ukraine front.

This demonstrates the firm commitment of the United States to Ukraine’s sovereign right to self-defense, the diplomatic legation wrote on Twitter.

This shipment, as well as the $2.7 billion in aid provided to Ukraine since 2014, demonstrates Washington’s commitment to bolstering its defenses against ever-increasing Russian aggression, the mission added.

Russia condemned the shipment of military material to Ukraine and stated that it only serves to increase military tension in the area, as recently happened with another consignment of light anti-tank weapons delivered by the United Kingdom.

The Kremlin denies any warlike intention, but conditions the de-escalation to treaties that guarantee the non-expansion of NATO, in particular to Ukraine, as well as the withdrawal of the Atlantic Alliance from Eastern Europe. Something that Westerners consider unacceptable.

The President of the United States, Joe Biden, addressed the crisis between Russia and Ukraine with his national security team on Saturday, the White House press group reported.

The president was briefed on the current status of Russian military operations on the Ukraine border and discussed diplomatic efforts being made to achieve de-escalation, as well as deterrence measures that are being closely coordinated with our allies and partners, including ongoing deliveries of security assistance.

On the other hand, the head of the German Navy, Kay-Achim Schoenbach, presented his resignation after the controversy unleashed by his statements on the Crimean peninsula. Speaking at the Indian Institute for Defense Studies and Analysis Manohar Parrikar, Schoenbach declared that the Crimean peninsula is gone, it will never return (to Ukraine), this is a fact.

“I have just asked the Federal Defense Minister (Christine Lambrecht) to release me from my duties and obligations as commander of the German Navy#, Schoenbach announced in a statement. He explained that his resignation is necessary to avoid further damage to the Navy, the Armed Forces and the country in general.

It’s easy to give it the respect it really demands, and probably also deserves, Schoenbach said, pointing out that Russia is an old and important country. Berlin distanced itself from the statements of the head of the Navy, who admitted that his statements were a mistake.

Crimea split from Ukraine and joined Russia after holding a referendum in March 2014 in which more than 96 percent of voters supported that option.