The disaster caused by the powerful earthquake in Haiti, so far 304 people died, many missing 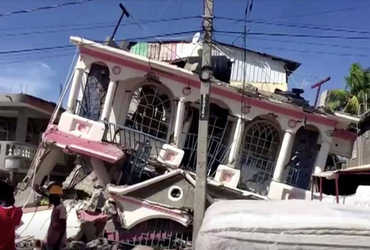 The Prime Minister has declared a month-long state of emergency across the country and said that international help will not be sought until the damage is assessed.

A magnitude 7.2 earthquake struck southwestern Haiti on Saturday, causing several buildings to collapse and the death of at least 304 people. According to a report, at least 1,800 people have been injured. The earthquake affected hundreds of homes, disrupted commuters, and reduced some facilities only to emergency workers.

Several cities were completely devastated by Saturday’s earthquake and rescue work is being disrupted between the two communities badly affected by the quake. The coronavirus pandemic has added to the suffering of the already badly affected Haitians. The country is already in crisis due to the assassination of the country’s president and rising poverty.

According to the US Geological Survey, the epicenter of the quake was reported about 125 km from the capital Port-au-Prince. The crisis could escalate as early as next week, as Hurricane Grace could reach Haiti on Monday or Tuesday. Tremors were felt day and night after the earthquake. The homeless and those preparing for the collapse spent the whole night on the open road.

Prime Minister Ariel Henry said help was being sent to where the city was devastated and patients were coming to the hospital. The director of Haiti’s Civil Protection Agency, Jerry Chandler, said the death toll was 304, the highest death toll in the southern part of the country. At least 860 homes have been destroyed and more than 700 have been damaged.

The prime minister has declared a month-long state of emergency across the country and said no international help will be sought until the damage is assessed.