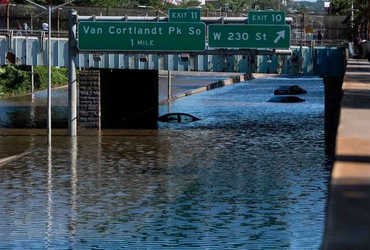 Hurricane Ida knocked in America. About six to seven crore people living in the north-eastern states have been affected by the storm. New York, New Jersey, Philadelphia, Connecticut, Pennsylvania, Mississippi, Louisiana, Delaware, Virginia and other cities in the state were flooded.
Hurricane Ida has wreaked havoc in America. The death toll had risen to six and the government feared the figure could still rise. All the northeastern states were hit by the storm. More than 3 million people were forced to remain in blackout due to power outage for 20 hours. The governors of most states have declared a state of emergency. Railway and road transport were shut down and many flights were cancelled. People were appealed not to step out of the house.
In New York, the record of rain for the last 200 years was broken. Three and a half inches of rain fell in an hour. At the same time, a total of more than eight inches of rain fell overnight, causing waterlogging across New York City. More than 200 vehicles were stranded on New York highways. 12 trains drowned in Metro Tunnel. Around 200 passengers stranded at the metro station were evacuated. The most affected area was New York City, where about 2,000 people were evacuated.
Thousands of people were evacuated from the coastal areas as rivers in the states were in spate. A total of one lakh houses have been reported damaged in all the states.
President Joe Biden sends message to hurricane and flood-affected areas: The US government is helping with relief efforts. The rescue work is going on in full swing with the cooperation of the local governments of all the states. Together we will get out of this disaster as soon as possible.
Joe Biden will conduct an aerial survey of hurricane and flood-affected states in the coming days.
According to the US Meteorological Department, Ida had a maximum speed of 30 kilometers per hour. Due to its high speed, this storm is considered the fifth most powerful hurricane in the history of the United States.