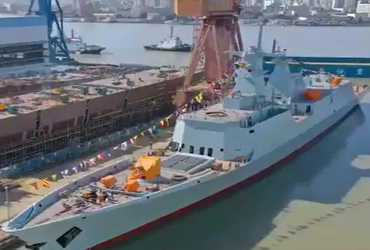 Pakistan’s special friend China has built a state-of-the-art warship for the Pakistani Navy to strengthen Pakistan in the Indian Ocean.

The ship was launched today at Shanghai Shipyard. Pakistani media claims that the new ship is one of the most sophisticated ships of the Pakistani Navy.

It will be equipped with state-of-the-art surface, sub-surface and anti-aircraft weapon systems. With the induction of this ship, the capability of the Pakistan Navy will increase.

China is also building an economic corridor in Pakistan, which is an important part of China’s ambitious One Belt and Road project. There has also been an agreement on lethal weapons between China and Pakistan. Which is a wake-up call for India.

Pakistan recently signed a 7 billion arms deal with China. China is also going to supply eight submarines to Pakistan. Four of these submarines will be handed over to Pakistan in 2023. In which the air independent propulsion system makes less noise and makes it difficult to detect underwater.