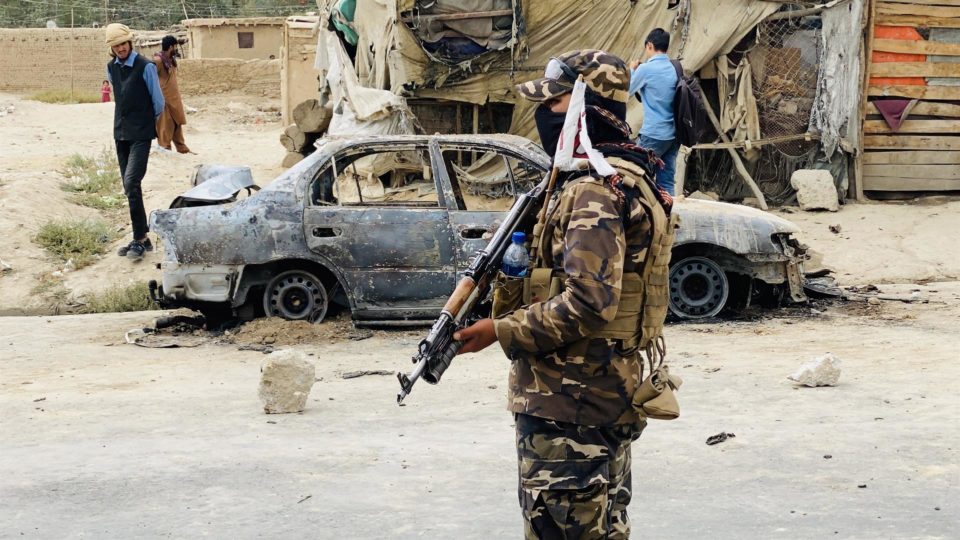 The Taliban stand guard near a vehicle that was used to fire rockets at Hamid Karzai International Airport in Kabul, Afghanistan, August 30, 2021. | Photo: STRINGER / Agence EFE

The number of deaths caused this Sunday (29) by the impact of a rocket against a house in Kabul, Afghanistan, rose to ten. The victims, aged two to 40, were part of the same extended family.

Family members of the dead told several international media outlets that the deaths were caused by the US drone attack on targets of the Islamic State terrorist group on Sunday.

Neighbors and relatives told The New York Times that the attack killed ten people, including seven children, a worker at a US aid organization and a US military contractor.

Witnesses reported that some of the children and Zemari Ahmadi, who worked for an American organization, died inside the car, while others were shot dead in rooms of the house. A 21-year-old girl from Ahmadi survived and said she saw the entire tragic scene that resulted from the explosion.

Aimal Ahmadi, who lost a brother, nieces and nephews in the incident, told Al Jazeera of his outrage at listening to the international press for most of the day yesterday, calling his family suspected members of the Islamic State. “They were innocent children,” said Ahmadi, who was shopping at the time of the explosion.

He said the family was preparing to move to the United States and his brother, a 40-year-old engineer who had just returned from work, was teaching one of his sons to drive. As the boy was practicing driving, guiding the car from the street past his house to the garage, several of the children got into the vehicle. That’s when there was the explosion that destroyed the car.

The Pentagon has admitted that Afghan civilians may have died in the attack and said it is investigating the case, saying the deaths may have resulted from the detonation of explosives inside the targeted vehicle. drones. According to the US central command, the attack destroyed a vehicle that posed an “imminent threat” to Kabul airport.

It was the second US drone strike in response to attacks that killed dozens of people at Kabul airport last Thursday.

In a statement, a command spokesperson said the forces were “aware of reports of civilian deaths” following their attack on the vehicle in Kabul, adding that they would be “deeply saddened by any loss. potential for innocent lives “.

“We are still evaluating the results of this attack, which we know ended an imminent IS-K threat to the airport. We know there were subsequent powerful explosions resulting from the destruction of the airport. vehicle, indicating that there was a large amount of explosive material that may have caused additional casualties. It is still not known what happened, and we are investigating, “the command’s most recent statement said. central, published Sunday.

The EFE agency consulted several Taliban sources who pointed out that civilians were victims of a bullet fired at Kabul airport. The Taliban also assured that the action had nothing to do with the US drone attack on a vehicle allegedly carrying a member of the jihadist group Islamic State (IS).

Rockets were launched at Kabul airport on Monday, some intercepted by a missile defense system, as US-led forces rush to complete the evacuation operation before the deadline for Tuesday. ISIS has claimed responsibility for these attacks.