Taliban repairs and blows up US helicopters 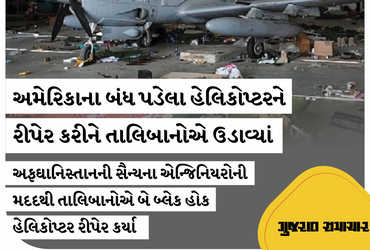 After the repair of US military helicopters, the Taliban have now started flying. Two American Black Hawk helicopters were repaired with the help of engineers serving in the Afghan military.
The US military has left billions of dollars in weapons and fighter jets, as well as helicopters, at Kabul airport. However, they are all closed.
Helicopters and planes were intercepted by US forces before leaving Afghanistan, and were badly damaged by the Taliban. But the US claim was reversed.
The Taliban repaired the helicopters before the shutdown with the help of engineers working in the Afghan army. An Air Force pilot named Naqib Himmat shared a picture of the plane on Facebook. The repaired helicopters were flown by the Taliban.
Images of the Taliban sitting in the cockpit of a 12 million Hercules transport jet have surfaced since the Taliban took over Kabul airport, but it has not been possible to repair it because its wheels have worn out. But the Taliban has been able to match the two Black Hawks.
The possibility cannot be ruled out that the Taliban will repair the repaired American aircraft in the coming days. In such a situation, the assumptions of America seem to be wrong.