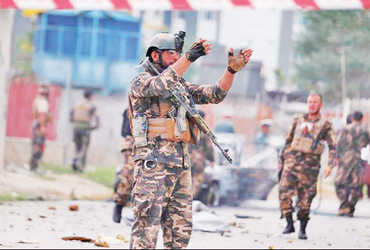 Possibility of Taliban occupation of Afghanistan at any time

While praying and rockets rained nearby, the video went viral, causing panic among people.

Kabul: Taliban terrorists are moving slowly in Afghanistan and occupying many areas. Taliban militants have also carried out rocket attacks. One such rocket attack took place near the Afghan President’s residence in Kabul. The attacker attacked in front of a mosque in the afternoon.

The Afghan president blamed the Taliban for the attack. On Tuesday, Eid prayers were going on in Rashtrapati Bhavan, during which rockets started raining near the building. However, there were no major casualties as the rocket missed the target and fell near the building. President Ashraf Ghani and other leaders and officials of the country were attending the Eid prayers.

There are reports that the attack was carried out by the Taliban. Taliban terrorists have now moved very close to Kabul and can capture Kabul, which is also the capital of Afghanistan, at any time. The rocket was fired from Parwan-e-Jil in Kabul. which is situated in the north direction. The rockets landed in Bagh-e-Ali Mardan and Chaman-e-Horoji areas of Kabul.

The palace of Afghan President Ashraf Ghani is located in this area. Meanwhile, the President of Afghanistan said that the people of Afghanistan must prove that they are one. Had the rocket hit the target, many praying people would have fallen victim to it. Security has been beefed up around Rashtrapati Bhavan after the incident.